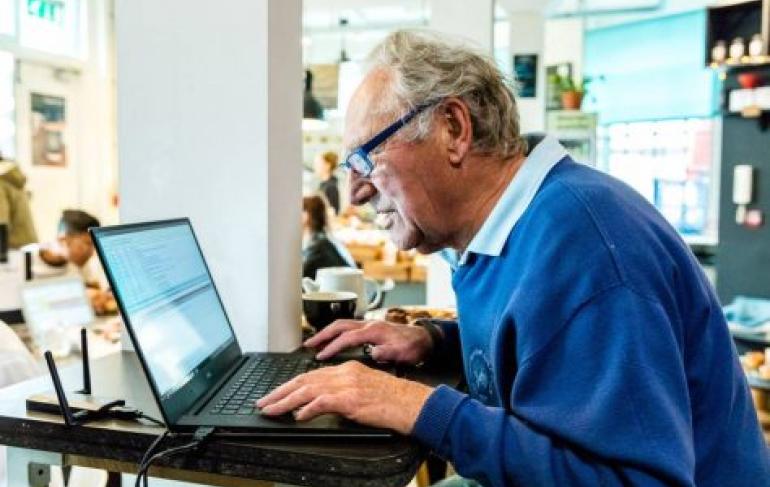 Octogenarian Alec Daniels (main picture) conducted the exercise as part of a course run by the Santander Bank, called the “Scam Avoidance School”.

Santander says the course is designed to “raise awareness of the ways in which hackers and scammers target their victims”.

Daniels, who was one of 12,000 over-60s to have taken the course, learned how to send a scam email and hack a public Wi-Fi hotspot in 16 minutes 40 seconds, despite having little knowledge of computers, with information that anyone can access on the internet.

This ethical experiment follows Santander research that 41% of people regularly use public WiFi hotspots to access the internet on their phones and computers to carry out financial transactions and a staggering 74% have been targeted by scammers with phishing emails, smishing texts and vishing calls.

The research, conducted by Optimum on behalf of Santander, is said to show that large numbers of people “regularly” use public Wi-Fi hotspots to access the internet on their phones and computers to:

Of those, over one in 10 admit to logging on to unsecured Wi-Fi networks several times each and every day, increasing their chances of getting hacked.

Chris Ainsley, head of fraud strategy at Santander UK, says: “Our experiment demonstrates just how easy it is for criminals to send phishing emails and hack Wi-Fi hotspots.

“We have seen the devastating results that fraud and scams can have on our customers and how much damage can be done if hackers get hold of even a small amount of personal detail.

“It’s great to have Alec on board to help out – having talked about scams with thousands of over 60s through our SAS it is good to get him involved to help spread the word.

“Raising awareness and educating people on how to protect themselves is vital to effectively tackling the criminals who ruin people’s lives.”

Marcus Dempsey, a certified ethical hacker (apparently there is such a thing) who worked with Santander and Daniels, says: “Unsecured public Wi-Fi networks can be easy pickings for criminals.

“By inputting passwords, bank details and confidential information into online banking or shopping websites over a public Wi-Fi, people could be unknowingly putting their finances and identities in the hands of hackers.

“If Alec, with no previous knowledge of how to do this, can write and distribute a convincing phishing email in a matter of minutes, it’s worrying to imagine the potential damage that actual scammers could be doing.”