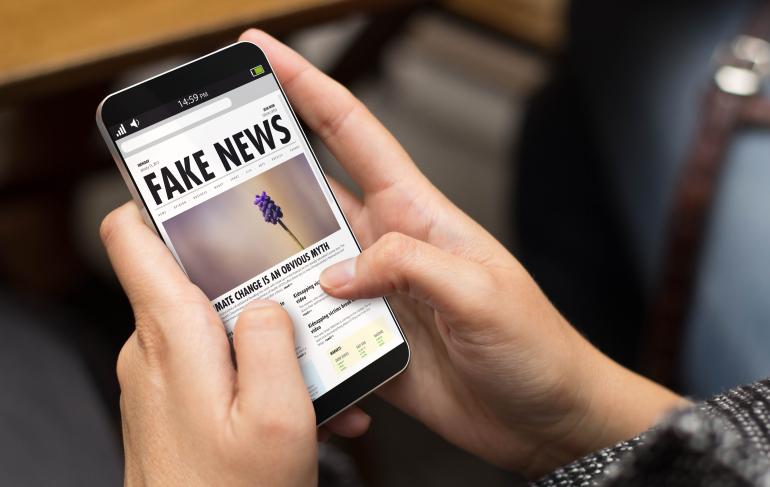 Anybody with a Netflix subscription (or anyone in the army of leeches that use someone else's) has probably watched the docudrama, The Social Dilemma. Yes, it's about as positive as a Portishead album, but it's also incredibly gripping and frightening as it unravels the existential threat associated with the business models of some of today's wealthiest tech companies.

One of the many tech giant-driven issues that the docudrama highlights is the danger of fake news. As we navigate through the pandemic, the age of 'disinformation' has reared its very ugly and hazardous head unlike ever before. Different foods, botanicals, recreational drugs, and others took centre-stage as the cure du jour, when the blunt truth is that we simply don't have a cure, and that the reports are a load of a-word-I-probably-shouldn't-use.

The impact of fake news on society is already significantly damaging, not least for its devastating consequences, which include polarisation and even death. However, fake news isn't something that just impacts us on an individual level. Increasingly, we are seeing businesses fall victim to fake news, and in more ways than one.

As countries plunged into lockdown, different apps and platforms became part of our daily lexicon, one of which was Houseparty. The social networking app, which allows people to have video conversations in 'the house' and play games with each other, underwent a surge in downloads as lockdowns began. Having been around for years before the pandemic and being relatively unheard of, Houseparty was suddenly experiencing completely unprecedented levels of popularity, and it looked like it would become the poster app de rigeur for socialisation.

Sadly for Houseparty, this would not be the case. In March, Houseparty hysteria erupted thanks to a smear campaign/conspiracy theory, in which Twitter users were alleging that their other accounts, such as Netflix, PayPal, and Spotify, were hacked because of Houseparty. Of course, Twitter went mad:

"HOUSEPARTY APP HAS BEEN HACKED! People are getting there [sic] socials, bans logged into etc Delete your account now! (Not just the app)"

Quickly, people began deleting the app in a panic, and the platform was now famous for all the wrong reasons. Later, we would learn that many of the accounts spreading these rumours were fake and, according to Houseparty, set up as part of a paid smear campaign.

Houseparty was so sure of it that it even offered to pay $1,000,000 dollars to "the first individual to provide proof of such a campaign". Unfortunately though, the damage to Houseparty's brand had already been done, and what could have been a huge success story for the business turned out to be a horror one.

Headlines aren't the only online fakery that can damage a brand's reputation. Although not quite classified as 'fake news', some products and services have been subject to fake reviews. A notable example of this is when Samsung was fined $340,000 for paying for false praise, while also paying individuals to leave fake, negative reviews about competitors. However, you don't have to be a Samsung competitor to be subject to fake reviews; sadly, it can happen to much smaller businesses too, including independent restaurants and hotels.

Similarly to the above, if fake news spreads about a business, or if a business is subject to fake damning reviews, it can negatively impact consumer confidence. If less people feel confidently about your product or service, then less people are likely to spend money on it. Some businesses may be able to turn the situation around with just a statement, but for others, it may necessitate an aggressive and costly marketing campaign.

Having said that, the financial damage of fake news can stem beyond simply less revenue and expensive reparation. In 2017, fake news began spreading that the CEO of Ethereum, Vitalik Buterin, had died in a car accident. Vitalik had to publicly confirm that he was still alive, but by that time, the overall market value of Ethereum had fallen by around $4 billion.

Fortunately, Ethereum has since recovered, but it's a haunting tale of how it only takes a few days to wipe a few billion off a company's market value.

As The Social Dilemma pointed out, fake news is incredibly divisive and exacerbates polarisation. Now, imagine that you are slowly weaning your teams back into the office. Some employees may be indifferent to the COVID situation, but observe the measures in place inside and outside of the office anyway. Others may be particularly anxious or fearful, and naturally they will also observe the measures in place. However, you may have some employees that are of the opinion that the virus is a hoax, or that refuse to wear masks during their commute to work, which indirectly puts your other employees at risk.

The pandemic is a huge part of our lives right now, and it's almost unavoidable in daily conversation. However, it's such a sensitive topic too and could be a source of unrest if employees realise that not everyone has the same view as them in terms of, say, mask wearing, vaccines, or the legitimacy of the virus overall.

In turn, the pandemic brings a whole new type of disagreement to the office floor. Before, colleagues might have butted heads over matters such as Arsenal versus Tottenham, or perhaps over different ideas related to the business. The coronavirus, however, is a far more delicate and divisive matter, making way for bigger disagreements.

Say one of your more anxious employees sees one of their colleagues on social media not wearing a mask on a London tube. The more anxious employee might feel particularly agitated and uncomfortable working around someone that they don't believe to care about the virus. However, the non-mask-wearer likely feels very passionately about their decision to not wear a mask, based on the online material they've been reading which suggests those that do are succumbing to control from the government (or something to that effect, anyway...).

There is no shortage of evidence and articles to say that masks slow the spread of the virus. However, those who don't believe in masks will also argue that there are plenty of articles saying that masks don't actually work/are just a ploy by the government or Bill Gates or whatever (can you tell which camp I'm in?).