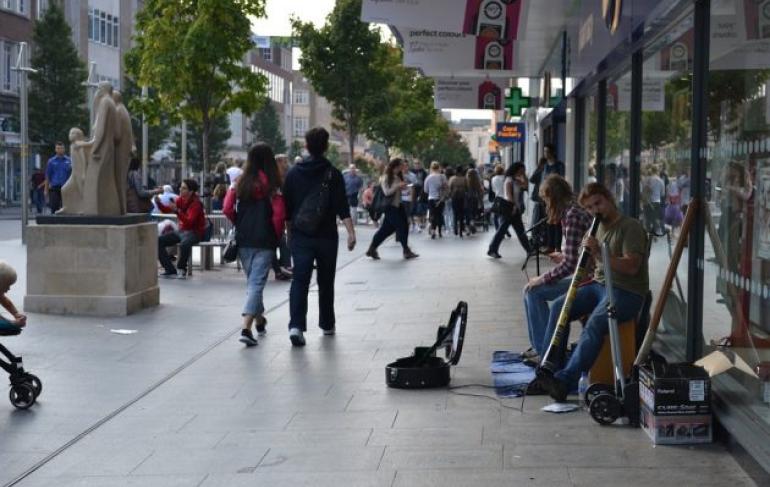 A lot of people have been concerned about the disappearance of shops from their local high streets, taking with them some semblance of what used to be a local community.

Perhaps communities will find other things to gather around but there has certainly been a fundamental changes happening to high streets in the UK and beyond for many years.

Popular high streets still attract those possessed by an entrepreneurial spirit, but increasingly they are coffee shops and other high-margin food establishments.

Your typical grocery store and clothes stores which operate on ultra-thin profit margins are finding it very difficult to keep their place in the high street parade. At the same time as the high street struggles, online retail has been continuing its growth.

Online retail's growth is the reason for the high street's demise and it looks like it's irreversible, permanent, and someone somewhere will have to completely rethink what high streets are for.

Former UK prime minister David Cameron appointed famous retail consultant Mary Portas to have a close look at high streets as part of a long-term development or restructuring plan – whatever was recommended.

Portas, who was dubbed the government's “high street tsar”, recommended “urgent action”, such as lowering of business rates and the removal of parking restrictions.

Five years on from those commonsense recommendations, the new “retail tsar” Bill Grimsey finds himself in a situation where famous retail chains such as Maplin and Toys R Us are face with closure and town centres across the UK continue to implode. Grimsey apparently thinks keeping the issue in the public eye is an important part of the solution.

Grimsey says “the high street continues to face big challenges”, adding that “it is time to get this subject back on everyone's agenda otherwise we will continue to sleepwalk into the remainder of the 21st century”.

Looming large over the demise of high streets and town centres is, of course, Amazon, the world's largest online retailer.

But then there are other online retailers which have grown as brick-and-mortar stores have shrunk. They include Asos and Boohoo, two clothes retailers.

Grimsey has reiterated the recommendation that business rates be reduced or at least frozen. Whatever happens to high streets, their struggles have given rise to a whole new online industry. Among the many types of companies that have emerged are data analytics firms, such as PCA Predict, part of a group called GBG.

Chris Boaz, group marketing director of GBG, says: “The British Retail Consortium's latest findings that high street sales have declined at the largest rate since 1995 may come as a surprise, but rises in online sales tell a different story.

“According to our data, in 2017 alone, online shopping grew 15% from the previous years and consumers are increasingly shifting to shopping online, both at home and on the go with 36% shopping on their mobile devices.

“Shoppers are no longer willing to head in-store when they can instead have whatever they want at the click of a button. This is a profound shift in British retailing and retailers must now have an online shopping experience that is easy, fast, and ultimately enjoyable.

“The goal is now for consumers to leave a website satisfied and having completed their transactions fully, yet competition is fierce online. Technology like address validation and platform personalisation can make a huge difference in the way consumers engage with a brand, increasing profits and customer retention.”

“As retail moves online, many retailers are currently trying to catch up to this fact.”

Some of the most successful online retailers in the UK include: