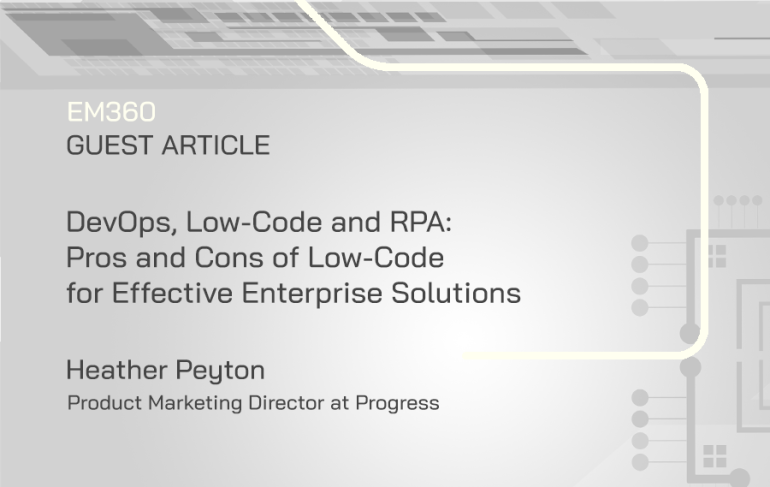 This article was written by Heather Peyton, Product Marketing Director at Progress.

A critical shortage of developers is expected to hit businesses hard in 2022, with 86% of IT decision makers citing lack of developers as their biggest challenge. Digital transformations worldwide have created an unprecedented demand for skilled software developers and IT professionals. In April 2021 alone, there were nearly 10,000 vacancies for software developers (9,783) compared to 5,630 at the same time last year. Organisations lacking the right talent will need to look within their existing teams for solutions to complete these digital missions.

Coding platform CodinGame’s Tech Hiring Survey 2022 reveals nearly half of employers are struggling to find suitable candidates to fill tech roles. Even though 53% of organisations have increased their budget for hiring developers, it’s not enough to escape the demand for candidates with high code developer skills.

CodinGame’s research suggests employers are using contractors to fill their skills gaps with 42% of recruiters saying they increased their reliance on contingent workers during the pandemic. Perhaps then a coding approach called ‘low-code’, which skills up non-IT, or ‘civilian’ workers in low-code app development platforms, could play a major role.

The principles of low code can be applied to “code-based” solutions to make them easier to learn, use and maintain. This means low-code can empower more development resources to maintain the pace a business needs through line of business rather than developer channels. Those closest to the business processes can solve problems and automate workflows themselves with easy-to-assemble business applications.

Let’s look at the challenges and advantages of the most popular low code approaches:

This set of technologies has garnered much industry respect, with Gartner’s Magic Quadrant for Enterprise Low-Code Development Technologies predicted to grow 23% in 2021. One of the most well-known platforms is the Salesforce Lightning Platform Mobile.

Pros - Ease of use is a major pro, with basic apps built in just a few clicks by an untrained developer, configuring UIs and even releasing via App Stores. Minimal to no training is required and organisations gain increased agility and flexibility to changing future trends.

Cons - Low-code app development platforms are usually short-term tactics, not typically requiring a plan for further development once the initial app is created. It’s more limited in customisation capabilities than some coding platforms, with less flexibility and integration options. Typically, complex apps or those with high security concerns aren’t compatible.

RPA programmes allow teams working on development tasks to automate repetitive tasks. It does this by creating software scripts using a recorder. This is similar in concept to using the macro recorder in Microsoft Excel. With a script created, a visual editor can be used to modify, reorder, and edit any steps. One of the biggest ever software IPOs, the UiPath IPO, is testament to RPAs growing popularity.

There are many and varied use cases for RPA programmes, which means almost any repetitive task done via a UI. Some business-user designed apps (UiPath and Blue Prism) and more classic DevOps tools specifically in the test automation space (Tricentis, Worksoft, and Eggplant) share this space, as well as new conversational-based solution, Krista.

Solutions like Krista have the potential to be used in DevOps toolchains. Krista can even tell you where you are with a release, by simply texting your question and receiving a response.

Pros – Swift automation can be created by business users purely by recording their daily activities. It allows automating of repetitive tasks while eradicating user errors; it’s also a boon for one-off projects.

Cons – RPA may be more a short-term solution for longer-term systems and updates. Ownership of long-term maintenance of the automation can become unclear as may security and compliance needs.

Many well-known DevOps tools, such as Ansible, Chef, Hashi, Puppet, Jenkins are based on low-code development languages. These user-friendly solutions have pre-built commands, helpers and resources so anyone can have a “coded approach”.

The Chef language includes a robust set of technology-agnostic commands that provide robust automation for configuring, testing, and validating systems. This means its users can execute complex functions across many devices with the most minimal code knowledge.

Providers of these solutions are offering more visual dashboards and UI-driven functionality which help deployment monitoring and system security. This hybrid approach delivers the best of both worlds by providing users with an easy-to-learn code-based platform that can be easily integrated with CI/CD systems and offering non-technical users and managers key visibility and analytics across their enterprise.

Pros - Maximum flexibility and scalability and easy customisation for the most complex automation challenges. Being community-led and part of a large established ecosystem, these solutions offer thousands of pre-built content templates and integration plug-ins that make it a dream to build automation and integrate into CI/CD pipelines.

Cons – They are script-based and require some understanding of development; best suited to business users with some tech skills. Tools need to be upgraded and maintained.

It’s important to consider hyperautomation as the next big driver of low-code DevOps platforms to meet the growing demands of a digital-first world. As our needs for digital operational efficiency has been driven higher than ever imaginable, organisations now need to support and deliver services to customers and workers anywhere. Automation is the answer to serving this world and it must be easy to create, easy to maintain and easy to scale. Only low-code solutions will enable automation providers in the DevOps space to enable organisations to hyperautomate.