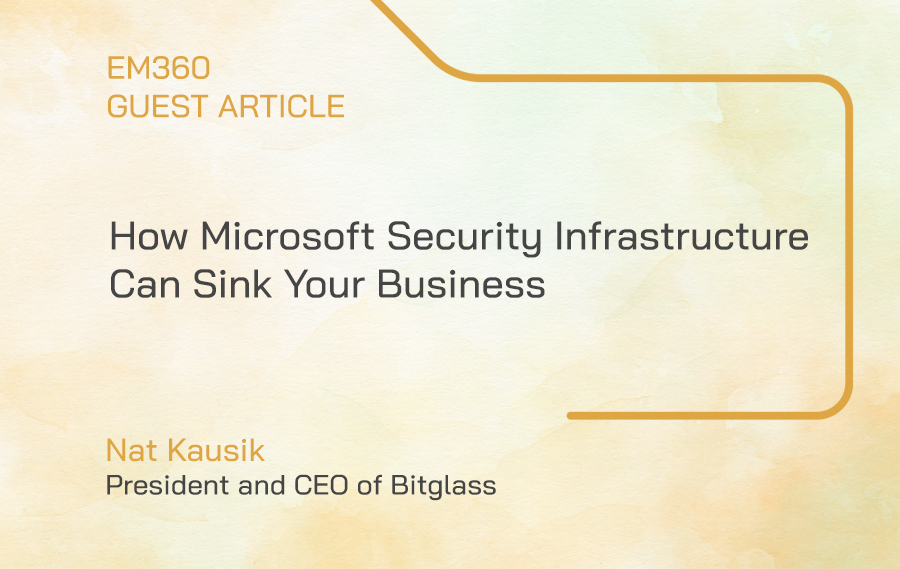 How Microsoft Security Infrastructure Can Sink Your Business

The recent Colonial Pipeline ransomware attack is another example of how hackers and cybercriminals are exploiting IT network security vulnerabilities to get inside organisations to either steal information or disrupt operations.

These ransomware attacks generally fall into three categories. Nuisance attacks deliver junk and rely on people clicking on a link that will take them to a location where the malware can be downloaded. Next are untargeted attacks, where thousands of emails are sent out as spam. The attacker doesn't really know who they are being sent to but hopes a small number of recipients will download the ransomware payload. The third category are targeted attacks where the criminals know exactly who they want to reach and personalise their efforts accordingly.

Among the most worrying trends, however, is Ransomware-as-a-Service - an approach that is booming. It separates the person who will do the hacking from those who will deliver the payload or attack. The criminal hackers are opportunistic, looking for vulnerable organisations wherever they can and may need to mount hundreds or even thousands of attacks before they are successful even once.

On the other hand, the people who create the ransomware are sophisticated organisations and often nation-states. They don't want to spend their time hacking ten thousand organisations to find one that is vulnerable. Instead, they create the ransomware payloads and cooperate with others to monetize the attacks, even collecting payments on their behalf.

It's a distribution of labour that is very similar to the methods employed in any other criminal enterprise, who usually have a supply chain including the equivalents of wholesalers and retailers who cooperate to meet the needs of their ‘customers'.

The rise of Ransomware-as-a-Service is especially bad news for companies that rely on a single vendor security infrastructure, such as Microsoft. For example, during the high-profile SolarWinds attack, hackers were able to jump from a single compromised laptop to the company's Active Directory to the Azure Active Directory and Office 365 for complete control. In doing so, did those attackers set a precedent for others to specifically target companies that rely on Microsoft Security Infrastructure?

Recent cyber attacks have made it clear that enterprises must break free from relying on a single vendor security infrastructure. At the heart of the problem is that for all of its focus on cybersecurity, Microsoft remains a frequent hacking target. Think of it this way: the biggest tech companies focus heavily on the biggest threats to their dominance and market share. Take Google, for instance, who have worked hard to overcome the risks posed by a slow Internet. The faster pages load, the more ads they can serve - all of which helps their bottom line.

Microsoft has its own priorities, and in focusing on enterprise sales they look at the big issues that can prevent them from becoming dominant in the business cloud. Right up there is security because if Microsoft cloud is seen as not being secure businesses won't adopt it, potentially impacting their revenue and market share.

As a result, they have invested heavily in their security infrastructure and capabilities, but the challenge they have is that while it's relatively easy to improve the performance of cloud services, it's much harder to make your own applications more secure because organisations tend to be blind to their own vulnerabilities.

In relation to building cloud infrastructure around a single provider such as Microsoft, the Solarwinds attack was highly sophisticated and targeted. It was designed to compromise a large number of systems worldwide based on the vulnerability the attackers identified. Clearly, because Microsoft is very widely used it made sense for them to target those environments and applications.

For organisations that are heavily or completely reliant on Microsoft infrastructure, services and applications - and therefore potentially subject to their vulnerabilities - there are a number of steps to take to shore up their security.

Firstly, they need to consider inserting a third party security product in between the application and security stack. By interfacing with each connected component with a standards-based partition, they can create a barrier for the flow of an attack.

But this shouldn't come at the expense of security that is integrated and consistent. Remember, it's always the weakest link that will be compromised first and organisations cannot be adequately prepared to face today's sophisticated threat environment without consistent security across their entire cloud and IT network security estate.

However, approaches such as cloud access security brokers (CASB) can deliver end-to-end protection for data in any cloud service and any device, drawing on technologies such as an On-Device secure web gateway (SWG) to decrypt and inspect traffic directly on user devices for content filtering and threat protection. In addition, a unique zero trust network access (ZTNA) approach provides comprehensive and secure remote access to on-premises resources.

In addition, secure access service edge (SASE) technologies can streamline security by substituting fragmented solutions that have to be managed and updated separately for one unified platform that delivers comprehensive security across every segment of the infrastructure. By focusing on a security strategy that mitigates the risks presented by a single vendor security strategy, organisations can balance potential cybersecurity risks against the opportunities that consolidating infrastructure can bring.

Nat is president and CEO of Bitglass, and a co-founder of the company. Prior to Bitglass, Nat was CEO of Asterpix, Trubates, FineGround and Arcot Systems, as well as positions in research and academia. Nat earned a B.Tech from IIT, Madras, an M.S. from Princeton University, and a Ph.D. in computer science from Cornell University.

Looking to Improve Your IT Network Security?

Our podcast series, The Next Phase of Cybersecurity, is now available on Spotify and Apple. We interview experts in the cybersecurity space, providing you with easy-to-understand insights that can help you to improve your IT network security.