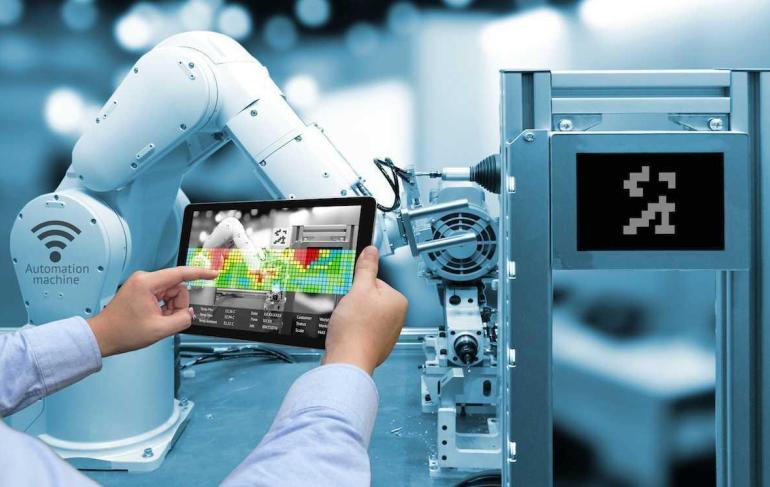 The industrial internet of things companies refers to the companies which use computing network to connect machinery in factories.

Until recently, most machines in factories did not have any computer connectivity. Even to this day, the majority probably do not.

Yes, they have electricity of course, so they’re connected to the power grid, but they often have no computing componentry and no computer connection.

But that’s all changing.

Specially-built sensors and chips are being attached to factory equipment – even to very old equipment – to enable them to connect to a computer network, using Ethernet cables which have different specifications to the ones you might have in your office or home.

The data transfer protocols might be different, too, but without getting too much into the geeky details, the industrial internet of things, or IIoT, is technically different from what might be called the general IoT.

As a result of these differences, the IIoT has developed as a distinct segment of the internet and there are many companies emerging with new and innovative technologies that could make them a fortune.

The reason why this technology is so important to companies is that a typical manufacturer with a large number of machines connected to an IIoT platform can expect to save millions of dollars a year in energy costs alone.

Through an IIoT platform, a factory manager can automate the switching off of machines that are not being used, saving not insignificant sums of money.

They can schedule downtime based on what the sensors are telling them about the condition of the machines. This enables them to avoid disruption to the production process – as unplanned downtime that brings everything to a halt can be extremely expensive.

That’s just two examples of how IIoT platforms are being used, but with artificial intelligence systems being introduced, there will be even more ways to find efficiencies.

General Electric, the gigantic US conglomerate, claims its IIoT platform – Predix – was the world’s first such service when it was launched in 2015 through its business unit GE Digital.

GE also claims Predix to be the largest IIoT platform with more machines, sensors and whatnot connected to it than any other.

Siemens, meanwhile, GE’s European counterpart brags that more than 30 million devices are connected to its IIoT platform, which is called MindSphere.

Both of these IIoT platforms have a large number of apps available through them. For developers, this is becoming another huge market opportunity.

It’s difficult to say which IIoT platform is the largest because most of them don’t share that sort of data. But given that Siemens and GE are two of the largest industrial companies in the world, it’s probably safe to say they are both at or near the top.

The list EM360º has produced below is based on guestimates on how many devices and chips and sensors each IIoT has connected.

However, it’s probably more accurate to think of the 10 companies are just being the largest industrial companies with significant IIoT platforms.

The first and believed to be the largest industrial internet platform in the world, Predix is one of the few parts of General Electric’s sprawling conglomerate that promises continual growth going forward.

The rest of GE has been struggling, and – unbelievable as it seems – there has been speculation that the company would become the target of a takeover.

That has not come to pass. Instead, GE has appointed Jamie Miller as head of its digital factory division, which includes Predix, and is looking for more growth in the software services market.

GE Digital, the business unit within which Predix sits, is said to generate $4 billion in revenue a year.

Siemens probably feels a little peeved that it wasn’t the first to launch an IIoT platform and has been pushing its MindSphere that much more to try and catch up with – or perhaps overtake – GE Digital’s Predix.

But Predix is, of course, not the only competition Siemens is paranoid about – in its native Germany, there are many industrial giants which could create a massive IIoT network almost overnight.

One thing to consider about these IIoT networks is that they are often mostly within the parent company’s domain.

That is the say, for example, Siemens is a huge, global company and simply connecting up its own equipment to MindSphere would make it one of the largest IIoT networks in the world.

Schneider Electric mostly provides energy-management systems and industrial automation solutions, both of which lend themselves perfectly to an IIoT network.

With an IIoT network, like Schneider Electric’s WonderWare, all the electrical machinery and robots and whatnot can be centrally monitored and managed.

All that complexity is gone now. Now, just one someone sitting at a computer in a control room can access the faulty machine directly and look at the sensor readings and know exactly what the problem is and would probably know how it can be fixed.

SAP is believed to be the largest software company in Europe. And unlike the rest of the companies on this list, it only does software. Maybe it makes a hardware product here and there, but it is overwhelmingly a software company.

Well, SAP is one of the leading business intelligence platforms, and many people are wondering how IT can be merged with what they call “OT” or operational technology, which refers to machines and physical objects rather than digital-only, to create integrated industrial operations which can be viewed from many angles from one control centre.

The main angles industrial managers are interested in are machine maintenance and energy efficiency, but when IT is connected to OT and, then, things like BI and even AI are introduced, we will enter a nightmare world full of incomprehensible acronyms and jargon if nothing else.

Bosch is just massive. Almost 400,000 employees around the world, and maybe 300 or so factories of its own – and that’s not including all the partners it works with.

So connecting up its own equipment and devices to its IoT suite has instantly created a gigantic network that spans the globe.

The company recently opened a factory in China, in partnership with a manufacturing company there.

Bosch, like most other industrial companies, is looking to expand its IIoT network with Chinese manufacturers.

Connyun is the name of the IIoT network Kuka created in partnership with Indian software giant Infosys.

From the beginning, the two companies were promoting the deep learning features of Connyun.

Deep learning is a branch of AI which analyses data and makes decisions using multiple levels of computation. It’s more complex and powerful than machine learning, although they’re both related.

It’s difficult to explain in simple terms, but since Kuka was recently acquired by Midea, the Chinese company which is said to the world’s largest household appliance manufacturer, the complexity of the operation globally is almost impossible to comprehend.

Fanuc is said to be the largest supplier of industrial automation equipment in the world, specifically industrial robotic arms.

In the past, robotic arms – although they have chips inside them and are connected to a special type of computer called a programmable logic controller – were not connected to any computer networks beyond their own robotic work cell.

Fanuc, working with partners such as Cisco and Preferred Networks, has created an IIoT network called Fanuc Intelligent Edge Link and Drive, or Field.

It’s something that may be the direct result of the network that Fanuc helped create for one of its largest customers, General Motors, which was said to be the first time industrial robots were connected to a single, global computer network.

Swiss industrial giant ABB is on such a steep growth curve that you sometimes wonder if it will fall backwards or find the edge ahead and fall down steeply beyond that.

But for now, the company is striking while the iron is hot, buying up companies left and right – including GE’s industrial solutions business – and becoming probably the most prominent sponsor of Formula E, the electric version of the Formula 1 car racing championship.

ABB is particularly bullish about its IIoT network, which it calls “Ability”, and the company mentions it every chance it gets.

ABB says Ability can provide highly detailed views of industrial machinery as well as home automation equipment, and much more.

The majority of ABB’s revenues are generated in the power generation equipment sector.

Honeywell has a hundred-plus-year history in the petrochemicals industry so it‘s no surprise that it’s probably the leading provider of IIoT networks and services to companies in that sector.

Hardly a week goes by without some announcement about Honeywell having agreed a deal with some massive petrochemicals plant or other.

The thing about such facilities is that they hardly have any human staff at all, considering the size of the plant and how much it produces.

So, everything is monitored and managed with sensors and chips, all connected to a central IIoT platform, accessible through computers.

Such is the fast pace of growth in the IIoT sector that it’s difficult to believe that Honeywell only launched its IIoT service just over a year ago.

No list about networks would be complete without a mention of Cisco, the original networking company.

Not only is Cisco famous and successful in the IT sector, the company is also doing very well in the industrial sector, having partnered with ABB, Fanuc and many others.

In fact, the industrial sector is one of Cisco’s big priorities this year, with the company having launched a specially designed solution for particularly large industrial companies with many facilities around the world.

As well as the 10 listed above, there are many other companies whose platforms are used as part of IIoT networks.

Hitachi’s Vantara is a particularly important one as, like GE Digital, it’s a multi-billion-dollar operation.

Amazon Web Services is another one that springs to mind since some IIoT hardware – such as routers and gateways linking machinery to the network – are sometimes sold with AWS connectivity pre-installed.

IBM Bluemix, Google Cloud Platform and Microsoft Azure are also in the mix, obviously, because they’re just too big to ignore and certainly have much to offer industrial companies.

The key resource that these tech companies – such as IBM, Google, Amazon and so on – can offer to industrial companies is data infrastructure, such as international cable networks, supermassive data centres in a variety of locations worldwide, and of course the associated technical expertise.

So, for example, a company like GE, which was planning to build its own data centres  instead chose to simply use AWS infrastructure instead.

Building and maintaining data centres and data networks is not the central activity of a typical industrial company. Not now anyway. But maybe that will change going forward.