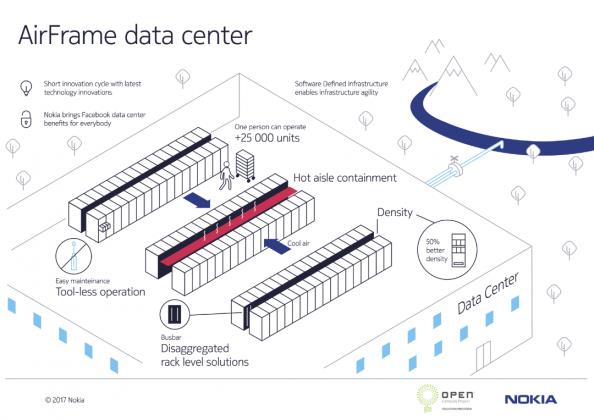 Nokia has launched what is described as a 5G-ready data centre. The company claims it is the first solution of its kind in the industry.

Although 5G networks are still in the early stages of being built, with regulations and standards still being drawn up and agreed, there is much anticipation about how the new technology will change the data and networking landscape. Download and upload speeds that are promised by 5G far exceed that of 4G, with some examples claiming that it will reduce times from several minutes to just a few seconds. However this is relatively far off in the distance and not many companies are developing hardware or software solutions for the new infrastructure. Only the leading infrastructure companies in the world are entering the 5G business, partly because they are the only ones who have the necessary funds to invest. For Nokia, which used to be a big name in mobile phones but is now big in the networking space, the opportunity to be a first mover is one not to be missed. Nokia's mobile phone handsets used to be the most ubiquitous in the world, until iPhones ushered in the era of the smartphone. Nokia's mobile phone business was eroded to a point where it eventually sold it off to Microsoft, but kept the networking operation which had built up around the success of the phone. Microsoft had originally planned to use it as a springboard to success for its Windows Mobile operating system. But that didn't work out as well as they might have hoped and Microsoft quietly closed down the operating system last year. Nokia's networking business has been reasonably strong and this new 5G solution may help to ensure its future. The 5G data centre concept builds on Nokia's "AirFrame" platform, which is a software-defined infrastructure that enables one person to  operate 25,000 units. It is also said to enable "tool-less operation", which obviously means no tools are required for maintenance. The official name for the new solution is Nokia 5G Future X and AirFrame portfolio, and it has found partners in Intel and others in the industry. Marc Rouanne, president of Mobile Networks at Nokia, said: "The edge cloud will play an essential role in delivering the compute power required for 5G. "By expanding our AirFrame and 5G Future X portfolio we can provide a network architecture that meets the needs of any operator and their customers. Used with the Nokia ReefShark chipset and our real-time cloud infrastructure software, the Nokia AirFrame open edge server will deliver the right decentralization of 4G and 5G networks. "We can work with operators to ensure that data center capabilities are deployed exactly where they are needed to manage demands as they expand their service offering."