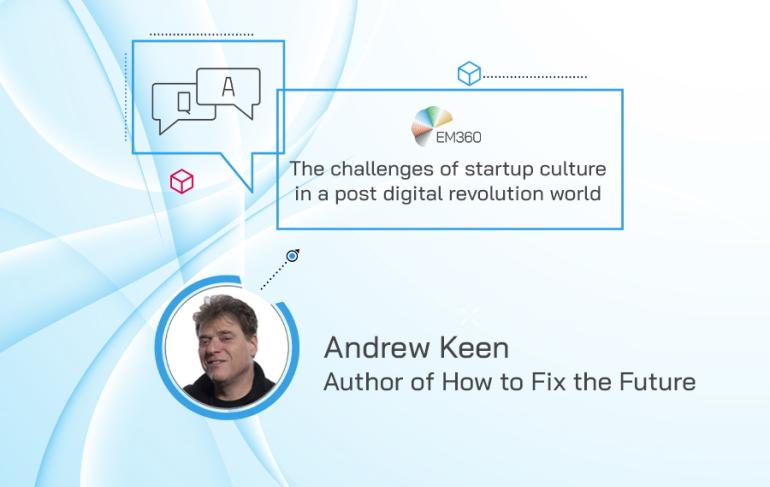 To some of us, new technology is synonymous with new opportunities. The very ethos behind the world wide web, for example, was egalitarian; Tim Berners-Lee expected that it would provide people with unbiased information and new opportunities to challenge the industry. However, what at first glance seems to be the promise of new opportunities can sometimes fall short of our expectations.

Our guest today is one of the most controversial figures in tech. Known for his critiques of modern day libertarianism and the internet, as well as being referred to as the “Antichrist of Silicon Valley,” Andrew Keen is here to tell us a bit about himself and his predictions for the future.

Andrew, would you mind just telling us how you got your reputation as the Antichrist of Silicon Valley?

Well, that wasn’t my name, although my mother who is unfortunately no longer alive, I’m from a Jewish family in north London, so anyone who gets to be the ‘Antichrist’ is quite an achievement. Most Jewish mothers want their children to be doctors or lawyers, professors, politicians, but the Antichrist was quite an achievement so I’m quite proud of that.

So who gave you the name?

I think it was The Pope. The Pope of Silicon Valley.

Fantastic. I didn’t realise you had that many links in The Vatican.

I think the internet has done a great job with conspiracy theories, so I’m sure the papacy is somehow behind the internet in some form or other.

Interesting perspective. You have been a vocal critic of what you refer to as “frat boy libertarian” approaches to business. What is it about these approaches that you find scary in regards to enterprise technology?

Well, can you explain more? You’re putting words into my mouth. I’m sure I’ve used those terms. When you say Frat Boy-

I’m using your words from your Big Think episode. It was “Frat Boy Libertarian” approaches to business.

That was probably from a long time ago, but what I probably mean from that is the Peter Teal, particularly Elon Musk school of businessmen, Musk is the best example now because he’s increasingly powerful, who believe  that government and regulations are by definition bad and restrict innovation. To remix that old Reagan quote from a business point of view, “When the government comes knocking it’s bad news for business.” I think that government can be actually very innovative when it comes to business, and I think what we’re seeing particularly today in the multiple disruptions around social media, Wall Street, investment and so many other areas, is that Frat Boy libertarianism exploding in society, generally for the worst. So, I would probably, thinking of popes and antichrists,  I would make Elon Musk ‘The Pope of Frat Boy Libertarianism.’ So, Elon, if you’re watching, that’s another title for you.

You have said before that the digital revolution has created a “winner-takes-all economy” where a select few business leaders monopolise the market. Do you think it is now harder to create a startup in 2021 than it would have been in 1980, and if so, why?

That’s a great question, Ross. I think there are areas where it is still incredibly exciting; areas where, if I knew, I would be doing startups because they’re not controlled by ‘winner takes all’ companies. So, perhaps in the biotech area, which is still not dominated by single companies, but if you wanted to do a search engine startup or a social startup or a fintech startup, it’s very hard because you have winner-takes-all companies in that space. There’s clearly a need when it comes to search for new business models, new innovation; the Google model, in my mind at least - and I’ve been warning about this for more than 15 years and I think I’m being proved more and more right, the Google model of trading information for personal identity doesn’t work, but because Google is so powerful, it’s very hard to compete. For example, you have Duckduckgo, which is a kind of startup which is actually well backed by some venture capitalists like Union Square Ventures, but it’s still struggling to compete. Facebook’s the classic example of a winner take all company, which of course has also probably used legal strategies for acquiring other companies, instagram, and other areas where they’re establishing more and more of a monopoly. So, I think, for the most part, at least in economies that we know, in spaces that make sense to mere mortals like you and I, it’s very hard. But, if you’re  a brilliant 18 year old with an idea that nobody else has thought of, I still think there are opportunities.

You have been critical of companies such as Google and Facebook for essentially working as big data companies. Over the last few years, we have seen GDPR affect many areas of the globe, including the US. For the most part, people are now more in charge of their data than they were before. What concerns do you have about data theft, or data breaches, from within enterprises in 2021?

Again, I think we’re talking about two - I mean, you’re talking about enterprises or ordinary people? Because, from an ordinary person’s point of view, and I consider myself an ordinary person, I don’t feel in any way in charge of my data. I have no idea how it’s being used and particularly abused by people. I’m relatively careful and relatively literal when it comes to this stuff, but I’m still inundated, for example, with advertisements that I can’t stand because the network, or whoever’s behind the network, seems to think that they know my tastes and interests and desires. From an enterprise point of view, of course enterprises are large organisations with significant investments in data scientists and experts, so I have no doubt that they are managing their data better. So, I have to admit, I have never been particularly concerned from the enterprise point of view; I have always been worried more from an individual’s point of view. Enterprises can look after themselves; they don’t need Antichrists like myself to step up for them.

So do you think GDPR has changed much in regards to how we manage our data?

We haven’t heard about it for a while because it reflects all the weaknesses of trying to legislate from a bureaucratic organisation like the EU. The GDPR took far too much time to get published, to get thought out - it went through committee after committee after committee and by the time it was released, it seems to me that it was rather archaic. The other problem with GDPR, and this is a problem with a regulation, I acknowledge this, I’m not someone who’s a blanket regulator and is always in favour or regulating whenever there’s a problem, is that it’s the large companies that can afford to deal with complex regulations like GDPR. So, it’s become increasingly clear that it’s only the Facebooks and Googles of the world who have infinite resources when it comes to hiring incredibly expensive lawyers who can cope with the complex demands of GDPR. So, what I would like to see with future regulation on data, is more up to the minute, more real time, simpler, more geared to smaller companies, rather than enabling the big players or winner-take-all companies who can just hire armies of lawyers and find their ways around these regulations. I’m not a big fan, as you can tell, of some areas of EU regulation. On the other hand, to be fair to the EU, and I made this very clear in my last book, “How To Fix the Future”, I spent some time with Margrethe Vestager, they are the first real serious political institution to stand up to Silicon Valley,. So, I admire that, but their regulations tend to be a little bit over-bureaucratic; stuck with red tape. You only need to spend 10 minutes in Brussels to understand that.