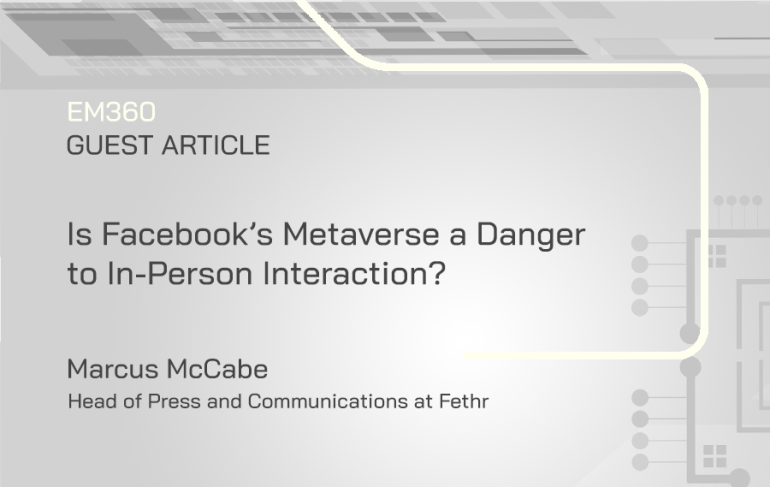 This article was written by Marcus McCabe, Head of Press & Communications at fethr.

Virtual reality will open up whole new realms of experience – for gaming, entertainment, even socialising. An all-round more immersive internet is on the horizon. Only a luddite would suggest otherwise.

But, watching Mark Zuckerberg and Facebook on the metaverse – a virtual space where we’ll all be able to ‘get together with friends and family, work, learn, play, shop, create’, and basically live – you’d be forgiven for marvelling at just how undesirable it looked.

Round tables of creepily smiling memojis don’t seem to improve on video conferencing (at least we can see facial expressions over Zoom). The metaverse certainly doesn’t look like an improvement on real life. Capturing the spontaneity and sheer electricity of real-world interactions looks a very long way off, if it can ever be achieved at all. Like clubhouse, maybe the metaverse just won’t live up to the hype.

But if it does turn out to be a second big bang like the invention of the internet, we need to think about how we manage its success. How are we going to preserve in-person socialising when it’s easier to access the metaverse from the comfort of our couch?

Many of us already feel as if we spend too much time in front of a screen. Social media, far from making us more social, often breeds isolation. Rather than getting out and making connections, we’re addicted to scrolling down feeds of familiar faces without actually getting the most out of our relationships. According to research by fethr, a startup app for making compatible new mates, 63% of people in the UK prefer making friends in person rather than online. But rather than offering us new ways to socialise in-person, the metaverse seeks to surround us with digital simulacra. The technological medium used to facilitate connection takes on a life of its own, and we risk losing sight of actual human needs.

Julian Issa, CEO and co-founder of fethr, believes in the power of ethical tech to facilitate in-person connection: ‘tech can be a force for good in our social lives, but we need to recognise that we’ll always derive more pleasure and meaning from in-person interactions rather than digital ones.'

It can help us design our perfect social lives but it’s not enough on its own. I worry that replacing real people with avatars could be detrimental to our mental and physical health going forward.’

Research into the effects of social media supports this idea. Where a person is highly social already, social media can actually improve their social lives and decrease loneliness. Where social media begins to replace in person socialising altogether, it becomes a negative influence. The internet enriches our lives as long as we don’t allow it to replace our lives.

These pitfalls will become even more pronounced when the metaverse arrives. Because it is designed to contain almost every type of human interaction it is more likely to replace nutritious real-world interactions with calory-lite digital interactions. Meanwhile, we risk becoming increasingly akin to the Axiom Humans from Wall-E, so caught up in virtual reality that we become oblivious to our surroundings and our real-world wellbeing.

Do we trust Meta (nee Facebook) to usher in such a radical technology, completely overhauling our habits while keeping our best interests at heart? If it’s recent track record is anything to go by, we’ll have to rely on ourselves to maintain the health of our in-person relationships. And rather than waiting for the metaverse to arrive, that process might as well start now. Join a sports club, download an app like fethr, above all make sure that you are being intentional about how you use tech to socialise.

Because, good old fashioned in-person interaction is vital for both physical and mental health, and that won’t change. It releases happy hormones like oxytocin and dopamine. It’s an antidepressant. It boosts your immune system and It’ll make you live longer. These benefits risk sacrifice at the altar of the attention economy.

And that’s without considering potential damage to our democracy. Facebook’s algorithm has been criticised for polarising us. If we are to spend more and more time inhabiting its digital spaces, we may find ourselves even more divided within our chosen VR echo chambers.

As fethr’s Julian Issa puts it, ‘there’s no way around it; if we want to avoid getting siloed online, we need to get out into the world and meet people we might not otherwise meet. At fethr, we use artificial intelligence to actually expedite that process. You’re matched according to your personality traits and ever changing social needs, so you necessarily meet people with vastly different backgrounds.’

Digital communication has accelerated in our post-pandemic world and new technologies like VR will doubtless tempt us still further into the rapidly expanding digital universe. But Mark Zuckerberg’s demonstrations of the metaverse should prompt us to consider how we want our social lives to look in the coming decades. Progressing after COVID-19 involves ingenious tech solutions that make working from home palatable, but it also involves getting back out into the world. When it comes to community building, it should always be tech for our sake rather than tech for tech’s sake. And that involves a healthy dose of real reality as well as virtual reality.

fethr is a London based app for making new friends in-person. It uses an artificially intelligent compatibility algorithm to match people based on their personality and interests.