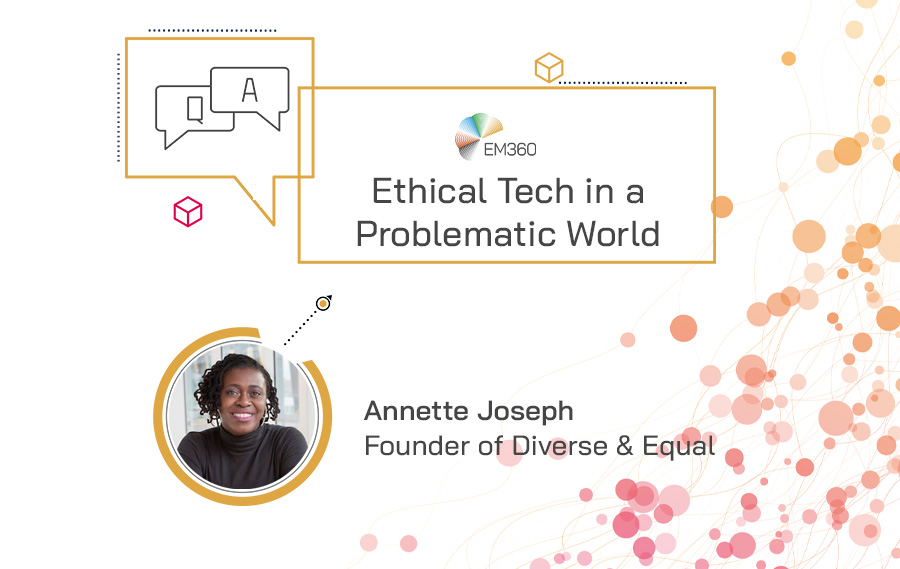 Ethical Tech in a Problematic World

Bettering diversity and inclusion (D&I) has been on the UK tech industry's to-do list for several years, and despite many discussions, the rates of employment and representation of minority groups - such as women, people from Black and minority ethnic backgrounds, the LGBTQ+ community, and persons with disabilities - are still worryingly low as little practical action is taking place. However, one part of the country that is particularly lagging behind is the North West. Home to six of the UK's 14 unicorns, the region is making its name as a tech hub, but there lies a profound D&I problem. In 2018, it was reported that in Manchester alone, over half of all tech teams are exclusively male.

To obtain greater insight into the current state of the NW tech scene, we spoke to Annette Joseph, Founder of Diverse & Equal - an organisation that works to open up Greater Manchester's booming tech sector to people from under-represented backgrounds. Known for her DiverseTechNW workshops, Annette has worked in and around tech for over 20+ years. Recently noted as a Northern Power Woman, she is an advocate for ‘tech for good', agility, and, most importantly, D&I, especially where the NW is concerned. One of her notable, earlier examples of such championship can be seen via her influence on Co-op, Manchester. In 2016, Annette was both the Delivery Manager/Agile Coach and Chair of The Rise Network. Her work within the network consisted of raising awareness of the needs of colleagues of colour, which prompted Co-op to, for the first time in its history, focus on this issue and, later on, become the first UK retailer to create an anti-racism manifesto.

Welcome Annette and thanks for joining us today! To kick-off, can you give us an insight into what it's like to work for a tech-based advocacy organisation?

Diverse & Equal was founded to increase diversity in tech. Our approach is holistic: we focus on win-win situations for organisations, for people from under-represented backgrounds, and for society as a whole.

I think one of the reasons that diversity and inclusion is moving so slowly is because we think about it in the wrong way. The focus is that it's “the right thing to do'' and while it is, this narrative can actually be quite harmful, as it often means that hiring diverse people is viewed as charity, thus, causing the majority group to believe they are being disadvantaged. When someone diverse joins a largely homogenous team or organisation — particularly when it's their ethnicity that's different  — the feeling is that the new person is somehow inferior when, more times, nothing could be further from the truth.

I have a marketing background, and one of the things that we always have to think about is the customer's perspective — i.e. “what's in it for them?” The products and services we provide answer this question for all our users, in which we also focus on what's important for them. For businesses for instance, we focus on the economic advantages of diversity which often gets buy-in at a much higher level.

There is no typical day working at Diverse & Equal. Sometimes my time is spent facilitating workshops for organisations around Cultural Intelligence, Inclusion and The Economics of Diversity. I've been doing quite a bit of speaking recently too. We have an Agile Immersion Bootcamp running at the moment, so Tuesday and Thursday mornings are usually spent with my team and the cohort. Later in May, we're launching another BlackTech Coding Taster Series so I could be working with my team to plan that. We're also about to kick off two research projects. One is with Leeds City Council and a collection of tech businesses around the city to explore the experiences of people from different ethnic backgrounds who work in the industry. The second is in collaboration with MMU and the ABACUS programme, looking at the impact of tech on Black people and the Black community — this one is massive. Obviously, we can't do it all so we're currently defining scope and deciding which thread we should follow to best inform our future focus.

Then there's also all the other typical ‘new business' stuff that needs to get done. Very different… very busy. I love it though.

Now, this question is a meaty one, so feel free to throw in a few links to any research/findings that aid in summarising your point(s), but what is the current state of diversity in tech in the North West and why are you so passionate about pushing the D&I agenda in this particular part of the UK?

Although gender diversity is improving, there isn't much ethnic diversity in tech in the North West at all, which is why Diverse & Equal was founded. I grew tired of being in meetings and meet-ups where I was the only, so decided to do something about it.

We raised over £6k last year to conduct research on Barriers to Entry for Black People in Tech, after I wrote an article about the murder of George Floyd and how that tied into the Black British experience. At the time, we could only find ONE User Researcher in the region. When you think about the role that a User Researcher plays in a team — the voice of the user/customer, it says a lot about the products and services that are being built in the region and how easy it is for particular groups to be left out. We decided to train 3 new user researchers while conducting our research. We chose 3 Black adults who had transferable skills from working in industries outside of tech. One of the trio just secured a job as UX User Researcher at Barclays — a role he wasn't even aware of last year.

Congratulations on raising such a huge amount for an important cause! Where does this interest in, and advocacy for, ‘tech for good' stem from and how does this movement govern your professional and/or personal life?

My Mum taught me that “a place should be better for you having been there” and that's something I've lived my life by and carried into my career. I'm also a problem-solver at heart. I've never been satisfied with fixing symptoms; I want to know the problem's root so the focus can be put on fixing it at source.

Tech for good speaks to the responsibility we all have in the industry to ensure that the products and services we build do no harm. At the moment, most organisations aren't thinking of the long term effects of their products/services and how they might impact on the people and communities that may be forced to use them in the future. A few examples around the unintended consequences to users not considered in the design process are  A level results algorithm that disadvantaged high performing students from lower attaining schools, AI that has biases built into it, and crash tests designed to solely keep men safe.

You're an ‘Award-winning Agile Coach'. Do you think business agility feeds into diversity, equity, and inclusion and/or vice versa?

I think BOTH business agility and diversity and inclusion should be the focus when an organisation is aiming to innovate. Diversity — in inclusive environments, is a key driver of innovation. And any business that wants to keep up with the rate of innovation has to have some sense of agility.

The thing I like most about working in an agile team is the ability to be myself. When I'm in my role as a Delivery Manager/Agile Coach, I'm responsible for creating an atmosphere of trust and safety so that the other members of the team are empowered to also be themselves. This feeling of safety and authenticity stimulates creative tension. And when people from different backgrounds bring their whole selves — e.g. their varying skills, opinions, and life experiences — to the team, they power the innovation that makes diverse teams more profitable.

The key here is the feeling of belonging. Without full inclusion and this feeling of safety, the performance of diverse teams is no better than any other.

A 2018 Forbes article highlights that ‘Diversity isn't just important for the tech itself — it's important for the people who make and use technology.' What are your thoughts on this, especially in relation to your Black Tech GoFundMe project?

I love this article. This quote sums it up for me:

“Tech companies control almost every facet of daily life, from how we communicate to the ways in which we travel and, even, how we buy our groceries. Their power is seemingly infinite, which is all the reason more why they must make a concerted effort to champion diverse voices from within.”

Tech is everywhere. If we weren't aware of it before, I'm sure the way the world has changed since last March has made it clear. The organisations that had made good progress with their digital transformation projects in previous years have thrived during this pandemic. Others have not.

Everyday, people are negatively impacted by tiny decisions made by tech teams that are homogenous. Seemingly insignificant details, like what weight should be attributed to a title in an airplane log to the reflective qualities of a hand — small details made during production, that are greenlit without thought or full consideration of consequences may have the potential to inconvenience, injure, or even increase the probability of death.

To wrap-up, what top tips would you give to tech companies who are looking to strengthen and better D&I?

Previous article
How to Harness the Power of Data: Tips for Digital Growth
Next article
Lord of the Rings, World Password Day, and the Keys to Well-Rounded Data Security