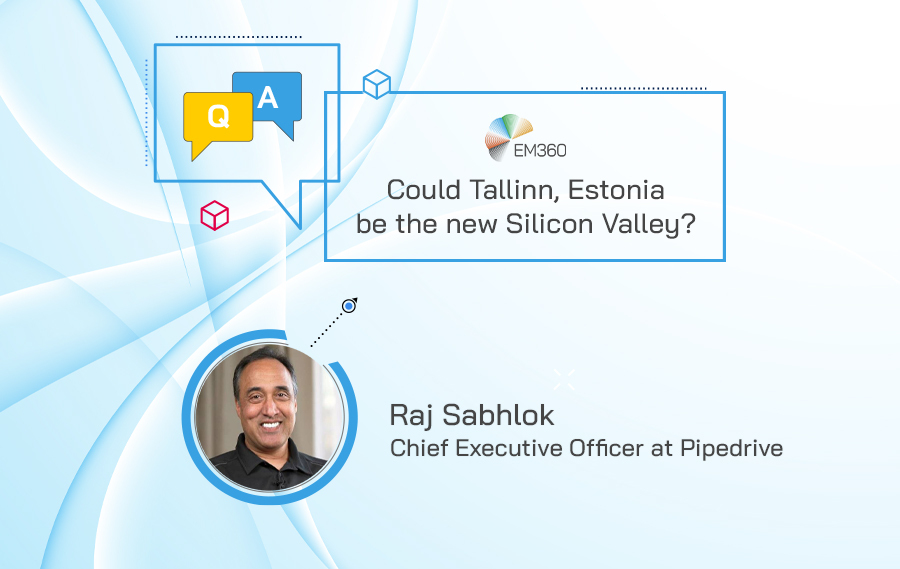 Could Tallinn, Estonia be the new Silicon Valley?

As the world plunged into lockdown and businesses went remote, Silicon Valley became somewhat of a ghost town (largely made possible by its own technologies). Since then, a number of the region's largest businesses have pledged to shift towards a remote-first model, begging the question of whether it will ever go back to being the Silicon Valley we know.

In the meantime, however, there's another city that's gaining tech company traction and is poised to be Silicon Valley's successor.

You've probably already seen the title of this article, so we won't make you guess, but if we had asked you to share your predictions for where the next tech hub would be, Tallinn may not have been front of mind.

So how exactly has this very small capital city of tiny Estonia positioned itself to take on a very large ambition?

Here to enlighten us on the matter is Raj Sabhlok, CEO at Pipedrive, the sales CRM platform that needs little introduction.

Thanks so much for joining us, Raj! Firstly, let's talk about Pipedrive, given that Estonia is the company's birthplace. Could you tell us a little bit about Pipedrive's beginnings and its geographical setup today?

Pipedrive was founded in 2010, with one single, and deceptively simple, goal in mind: to create a management tool that places salespeople at the heart of the user experience. Our co-founders had over 40 years of sales experience combined, yet they struggled to find software that fit their needs. They became inspired to do away with generic approaches and really get to the bottom of their niche, where they unearthed a solution to what they considered to be a very specific problem. This is partly what makes Estonian companies so unique: in addition to being exceptionally solution-oriented, they never fail to keep one eye on the bigger picture, constantly measuring their own ideas against the needs of their larger community.

Pipedrive's story reflects the roadmap of that original approach. We now have offices in 7 countries across Europe and the US, but our ethos very much transcends regional barriers. With nearly 700 employees representing more than 50 nationalities, and customers in over 150 countries, we firmly believe in, and aspire to, international collaboration.

Estonia is renowned for being a highly digitally advanced society. Can you share some examples of why this is the case?

In Estonia, digital solutions are commonly viewed to be superior to paper-based (or more “twentieth-century”) approaches. This may sound self-evident, especially with the world's recent transition to remote work, but it nonetheless proves difficult for some to leave their old ways behind. In Estonia, however, technological solutions comprise a vital part of everyday life as the country proactively seeks to leverage tech in all areas. Take the use of digital ID cards for example: these have fully replaced paper-based documentation, and are used for all bureaucratic purposes, from signing leases, accessing health records to voting. In comparison, this remains a point of contention in Silicon Valley and the US as a whole, where the refusal to provide generalised access to a vote-by-mail system sees the original tech hub ever reliant on physical documents. Estonia has long embraced a democratic outlook as much on voting as on other, more trivial uses of technology. It notably considers internet access as a basic human right, recognising its catalytic effect in terms of education, economic progress, and overall social welfare.

Estonia is also considered to be an education powerhouse. Can you tell us some more about this?

It has become somewhat of a cliche to say that education is the key to improvement, but Estonia's example shows the old adage to be true. Major investments in Estonian education date as far back as 1996, when the country launched its - aptly named - Tiger Leap initiative, devoting major resources to the development of computer and network infrastructure, with an emphasis on education. More recently, in 2012, the ProgeTiger programme saw the integration of technology subjects into the school and even kindergarten curricula, with programming and robotics taking center stage. This meant students were sensitised to the impact of technology from a very young age and inspired to consider tech careers as a personally rewarding and economically viable option. This strategy paid off: Estonia now leads the Programme for International Student Assessment (PISA) list. This is different in America, where digital literacy levels remain low and Silicon Valley schools in particular continue to underperform, despite the staggering technological innovations emerging from the area. However commonplace this observation might be, education really has paved the way for development in Estonia, allowing it to catch up with and ultimately eclipse Silicon Valley.

Slowly but surely, the world is paying more attention to Estonia. What do you think the country would need to have/do to dethrone Silicon Valley?

We could certainly use a little help from Hollywood! Part of what made Silicon Valley the fountainhead of digital innovation was, admittedly, the abundance of tech companies originating there. Yet, the influence of other factors cannot be underestimated. The proximity of the world's largest cinematic powerhouse, paired with America's famous taste and talent for large-scale storytelling, has resulted in a lot of “Silicon stories” getting global coverage and attention. Places like Estonia could benefit from a touch of American marketing, especially considering the incredible successes linked to the area: Skype, Pipedrive, Transferwise, and Bolt are just a few of the Baltic stories testifying to the country's greatness. The world has already started recognising its technological development, yet Estonia has more to offer. Places like Estonia deserve to enter the public consciousness not so much as “tech havens” but as spaces alive with inspiration and original thought, where some of the world's most groundbreaking designs are born. We have the resources to help ideas thrive; it would be fantastic to see that acknowledged on a global scale.

What do you think the future of Silicon Valley looks like?

Despite some worrying trends the US is currently facing, there are many reasons to remain optimistic. The US may be facing challenges in terms of economic growth, not to mention political and social unrest. However, I believe Silicon Valley can restore its old claim to fame and connect with Estonia as well as the rest of the world in healthy competition and cooperation for global development. Pipedrive and other Estonian and US companies would appreciate a mutual exchange of knowledge, especially at this time of global hardship. This year has been transformative in a number of ways, and though we cannot and should not disregard the heavy losses suffered by all, we can perhaps use this time for positive change. Let 2020 be a call to arms, for Silicon Valleys old and new, to join forces in building a better future.