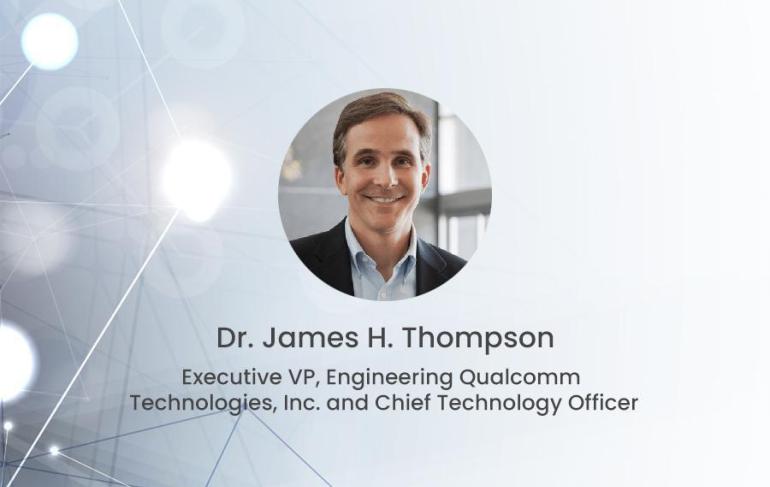 In today’s complex digital world, it’s not unusual for some talented individuals to wear multiple hats within a single team. That’s the case for Dr. James H. Thompson, who currently works as the Executive Vice President of Engineering and Chief Technology Officer at Qualcomm Technologies.

Qualcomm is committed to delivering lightning-fast connectivity solutions, from state-of-the-art WiFi to 5G mobile data. The organisation has experimented with everything from smart homes and cities to XR, AR, and VR technology, with James helping along the way. In his role, Thompson is responsible for a host of global research and development activities connected with wireless chipsets in QCT – the Qualcomm semiconductor business. Dr. Thompson also oversees corporate engineering and CR&D development within the company.

An Expert in Engineering

Dr. Thompson joined Qualcomm in 2001 and began working in the QCT engineering space in 2004. Over the years, James has been in charge of overseeing a vast selection of activities associated with systems engineering and hardware at the company.

Before his time with QCT, Thompson led the Globalstar engineering team for Qualcomm. He was also an essential part of the team that built the CDMA cellular technology standard. As well as this, Dr. Thompson has been a member of the Executive Committee at Qualcomm since 2012.

The engineering expert has helped to establish Qualcomm’s position as a leader in everything from LTE and WCDMA to DSP, and audio technologies.

A Seasoned Veteran of the Industry

In his career with Qualcomm, James has proven himself to be a valuable member of staff. His understanding of the engineering industry and his in-depth knowledge of mobile technology has helped to drive the business forward in almost every area.

Before he worked with Qualcomm, Thompson honed his skills by earning his bachelor’s and master’s degrees, as well as a doctorate in the areas of computer and electrical engineering. In particular, he completed his education at the University of Wisconsin and is now a member of the industrial advisory board for the University’s College of Engineering. James also sits on the Council of Advisors for the Jacobs School of Engineering within the University of California.