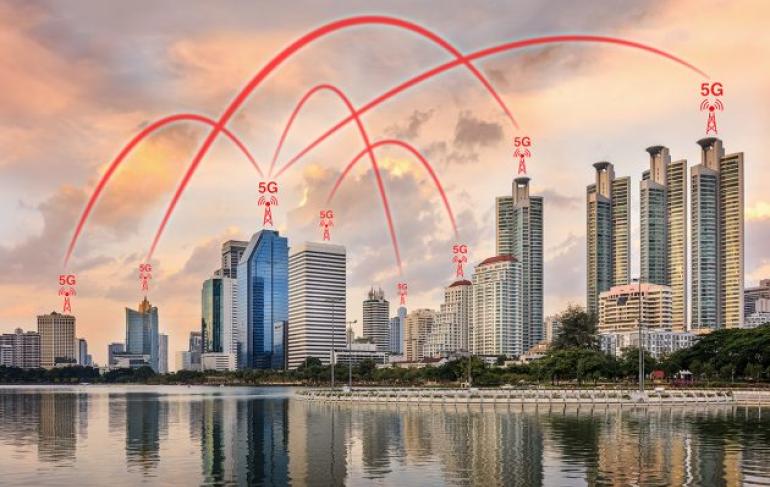 Fifth-generation mobile telecommunications networks are still being constructed in cities around the world, with giant companies like Verizon, AT&T, and NTT rolling out their offerings this year in region after region.

Meanwhile, devices manufacturers and their components suppliers are developing products to make the most of the new superfast network.

According to standards set by the International Telecommunications Union, a network can only be described as 5G if it offers a number of advanced features, including a minimum downlink data rate of 20 gigabits per second, and a minimum uplink of 10 gbps.

That's the theoretical speed of the network, but the end user will actually only be able to download at 100 megabits per second and upload at 50 mbps.

While that seems like a big gap between theoretical network performance and user experience, it may be worth noting that it's still around 100 times faster than 4G.

According to the ITU, files that might take 90 milliseconds to download using 4G would download in 1 millisecond using 5G; a full HD movie would take six minutes to download on 4G, but only 3.6 seconds on 5G.

With such an enormous speed improvement on offer, tech companies are taking the opportunity to develop devices that look to gain an advantage by among the first with 5G-ready products, especially smartphone companies, since 5G is more about mobile telecommunications than anything else.

According to a report on CNet.com, the first 5G phones are likely to emerge next year, with one particular Qualcomm component being backed as a likely big winner.

Qualcomm is under pressure to replace the business it may lose if Apple develops its own chips instead of buying from Qualcomm.

So, Qualcomm's new X50 5G modem chip is the company's answer and its possible way out of a proposed takeover by rival Broadcom.

Broadcom has offered to buy Qualcomm for $121 billion in what would be the largest-ever takeover in the technology sector.

However, despite Broadcom repeatedly increasing its offer over the past few months, Qualcomm has mostly given it the silent treatment, and recently rejected it outright.

While many may have been thinking that it would be best if Qualcomm accepted the Broadcom offer, Qualcomm is clearly of a mind to make it on its own, with the help of its new chip and the backing of a relatively large number of tech partners.

CNet reports that 18 telecommunications carriers and 18 device makers have already backed the Qualcomm X50 chip, and many of them are starting trials this year using the component.

Qualcomm has also made a bid to buy NXP, another large chipmaker, for $38 billion.

NXP is currently one of the leading suppliers of chips to the automotive sector.

And as more of those cars get connected to the internet and include autonomous functions, many of those chips are going to need to be 5G-ready.