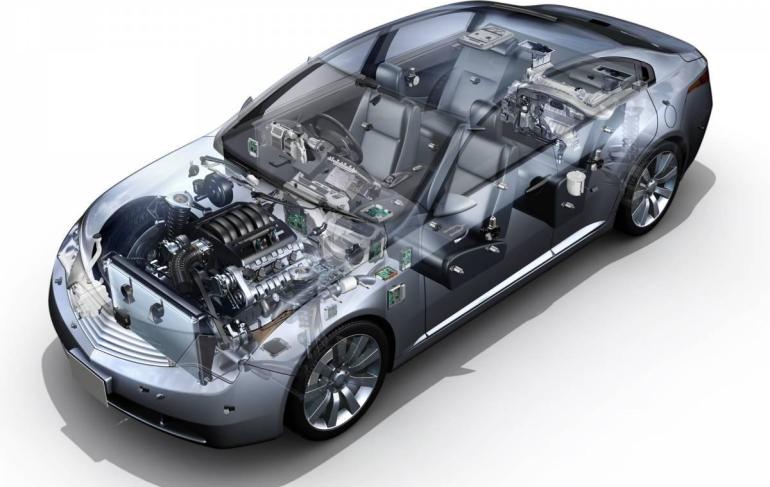 The new generation of cars is being equipped with advanced technologies for networking and autonomous driving, both of which require greater computing capabilities inside the car as well as at the data centre.

In the past, when cars were entirely mechanical, they generated no computer data at all. Even as they integrated more electronics, they could deal with all the data processing onboard, mostly using application-specific integrated circuits. But in the near future, new cars will have higher levels of connectivity and autonomous features, and will generate as much as one gigabyte of data per second. “Processing such huge quantities of data calls for more than classic control units,” says Dirk Hoheisel, Bosch board member responsible for autonomous vehicles. Bosch is one of the leading suppliers of automotive electronics, or technologies collectively called advanced driver assistance systems, or ADAS for short. Bosch has built a new computer – which is about the size of a car radio and loaded with artificial intelligence – in partnership with Nvidia. This “carputer” is scheduled for launch in 2020. But even the “carputer” – which could be considered an edge device – will not be able to deal with all the data generated by newer cars. Edge computing and devices – computing that takes place at the outer edge of the network, away from the data centre – will likely deal with the most time-critical functions of a car which need instant reactions, but for less urgent processing requirements a connection to a data centre would be useful, or perhaps necessary. In anticipation of this huge increase in both the volume of data and the processing required, some companies are developing networking and computing infrastructure especially for cars and driving, much of which will be reliant on next-generation mobile telecommunications networks, or 5G. For example, Denso, the main supplier of automotive components to Toyota, is part of a new consortium which will develop infrastructure for driving data. As well as Denso, other companies in the consortium are Ericsson, Intel, NTT, NTT Docomo, Toyota InfoTechnology, and Toyota Motor. Together, the companies have initiated the formation of the Automotive Edge Computing Consortium. The objective of the consortium is to develop an ecosystem for connected cars to support emerging services such as intelligent driving, the creation of maps with real-time data and driving assistance based on cloud computing. It is estimated that the data volume between vehicles and the cloud will reach 10 exabytes per month around 2025, approximately 10,000 times larger than the present volume. This expected increase will trigger the need for new architectures of network and computing infrastructure to support distributed resources and topology-aware storage capacity. The architectures will be compliant with applicable standards, which requires collaboration on a local and global scale. The consortium will focus on increasing network capacity to accommodate automotive big data between vehicles and the cloud by means of edge computing and more efficient network design. It will define requirements and develop use cases for emerging mobile devices with a particular focus on the automotive industry, bringing them to standards bodies, industry consortiums and solution providers. The consortium will also encourage the development of best practices for the distributed and layered computing approach recommended by the members. The companies will invite other technology companies to join the consortium. Ericsson, one of the consortium partners, has already expanded the scope of its ambition with a partnership of its own. Ericsson is partnering with Zenuity, an automotive software development joint venture between Autoliv and Volvo, to develop a connectivity platform for cars. Ericsson says the “end-to-end” platform will be for connected safety, advanced driver assistance systems, and autonomous driving software and functions. In the first phase of the collaboration, Ericsson and Zenuity will work together to develop the Zenuity Connected Cloud – powered by Ericsson internet of things accelerator. The offering will accelerate speed to market with cloud-based solutions for original equipment manufacturers, using the companies’ existing assets to create a base for innovation and new services. The service will consist of in-vehicle software integrated with other vehicle functions, onboard sensors and cloud support functions that will provide external data from other vehicles and cloud infrastructure. This will enable real-time visibility to guide vehicles with information and events in transit, says Ericsson. Dennis Nobelius, CEO, Zenuity, says: “Zenuity was formed to develop the software and solutions the industry requires to create a truly global connected automotive ecosystem. “With a strong focus on increasing safety through ADAS and AS software and functions, our unique expertise in ADAS and autonomous technologies combined with Ericsson’s technology leadership in complex connectivity solutions is a win-win for the entire automotive industry. “Together, we will provide OEMs with unique, robust and scalable cloud-based solutions with much faster time to market, allowing them to capture the seemingly endless possibilities in the connected automotive ecosystem of the future.” As part of the collaboration, Ericsson will provide its IoT platform, IoT Accelerator, which orchestrates the cloud required to run Zenuity’s support functions. The platform, a scalable IoT solution, will be tailored to the specific needs of ADAS and autonomous vehicles delivering the robustness, responsiveness and security needed. Niklas Heuveldop, senior vice president, chief strategy officer, head of technology and emerging business, Ericsson, says: “Connectivity is reshaping the future of transport, and Ericsson is right at the heart of this with our IoT Accelerator platform that underpins the connected automotive ecosystem. “We will work closely with Zenuity to develop a truly end-to-end offering that enables higher levels of safe driving through ADAS and AD software and functions.” Autoliv, which specialises in automotive safety systems, is the exclusive supplier and distribution channel for all Zenuity products. The offering created by Ericsson and Zenuity will be sold and promoted by Autoliv to car manufacturers worldwide.