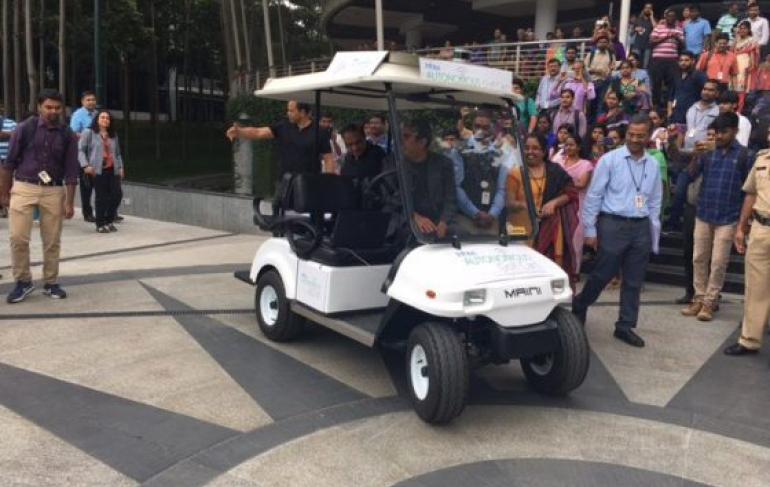 One of the world’s largest software companies, Infosys, is concentrating on robotics and automation driven by artificial intelligence for future growth.

The company’s CEO, Vishal Sikka, says these technologies are brought together in the driverless car and Infosys is developing this side of its business.

“Autonomous driving is something every automobile company will get into, and we are trying to build talent around this.” Vishal Sikka, CEO, Infosys

Sikka says the Indian information technology giant, which employs more than 200,000 people in total, is creating a large team of “thousands of engineers” to develop its capabilities in AI for robotics and automation, reports the Economic Times of India.

Responding to perceptions and perhaps comments that Infosys is a conservative company which helps companies manage their IT rather than develop new technologies, Sikka tweeted: “Who says we can’t build transformative technologies?”

Accompanying his tweets was a picture of a driverless golf cart which it built by itself in India. Sikka says the vehicle demonstrates the company’s potential to gain a market share in the autonomous and connected vehicles market.

Sikka says: “The driverless car is kind of the technology we are strongly focused on.

“If you go by our numbers, about 10 per cent of our revenue has come from new technologies, services that did not exist 2 years ago. These are high growth services and that's where our focus will be.

“The driverless car shows we can be at at the cutting edge of technologies.”

Sikka says Infosys will make the most of its partnerships with companies such as Boeing and Toyota, both of which are developing autonomous technologies.

Sikka adds: “Autonomous driving is something every automobile company will get into, and we are trying to build talent around this.”

Infosys recently made 11,000 people redundant. In the company’s recently released company reports, it was made clear that these redundancies were caused by automation software – which made hiring humans unnecessary for those tasks.

Automation software can and is often categorised as AI, and this is a category of software in which Infosys has excelled, making 10 per cent of its revenues there.

Sikka adds: “We are revealing new growth with services that we have been focusing on for the past couple of years including – AI and cloud computing.

“Going forward, we will count on strong growth coming from these services.”