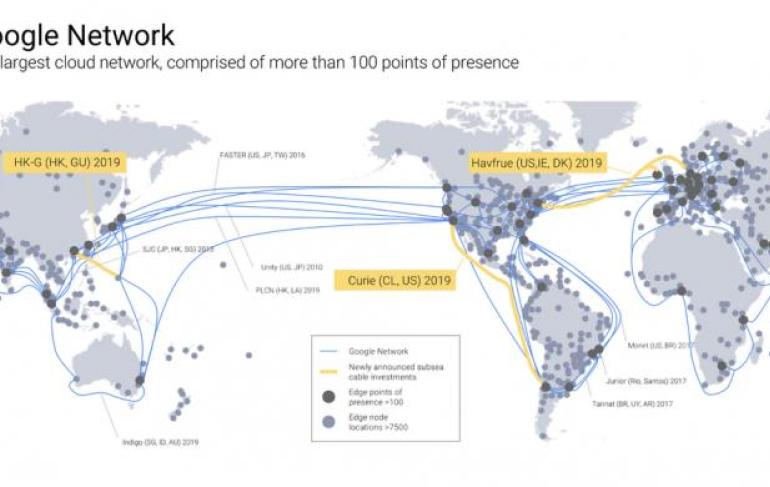 Google is adding to the $30 billion it has already spent on expanding its infrastructure around the world, with several intercontinental subsea cables planned.

In a blog post, the search giant says, “We’ve spent $30 billion improving our infrastructure over three years, and we’re not done yet.”

The company plans to open data centres – or Google Cloud Platform regions – in the Netherlands and Montreal, Canada in the first quarter of this year, with additional facilities in Los Angeles, Finland and Hong Kong planned for later this year.

Further, the de facto owner of the internet says it will commission three subsea cables in 2019. They will include:

With these new cable investments, Google now says it has “direct investment” in 11 cables, including those planned or under construction.

Subsea cables are the main way to carry data around the world, and where they make landfall is usually called a point of presence or PoP. Another important intersection of the internet is called a node. A node can be something as simple as a computer or a router, but what Google means is higher level connectivity equipment, probably located at data centres.

The company highlighted some of the features of its network, which include:

Google’s G Suite and cloud business – which offers services such as Cloud CDN, Machine Learning Engine, and BigQuery – have been growing steadily.

This would be the main reason behind the company’s decision to invest more money into expanding its network capacity.

The company hopes the fact that its network is directly accessible to its customers and end users will differentiate it from other cloud providers, which tend to have a less direct connection, according to Google.

“We have built a superior cloud network as a result of the well-provisioned direct paths between our cloud and end-users,” brags Google.