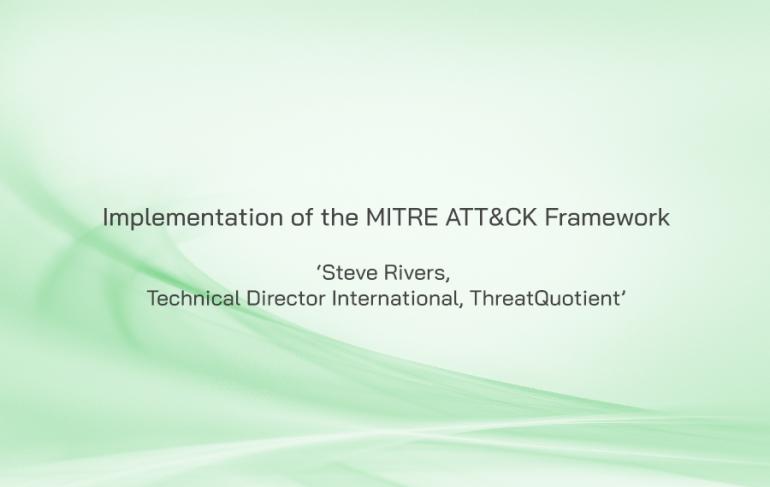 Sun Tzu, the fifth-century B.C. Chinese general and philosopher, knew that knowledge is power and stated this in his oft-cited work, Art of War, as follows: "If you know the enemy and know yourself, you need not fear the result of a hundred battles." This wisdom of the military strategist is not only applied on real battlefields, but also on the digital frontlines of cyberspace. At least since the emergence of the first real malware about 25 years ago (e.g. 'Melissa' and 'ILOVEYOU'), it became clear that criminals lurk in the expanses of the World Wide Web. Nevertheless, it is no use giving up and surrendering to your fate. Instead, it is important to face up to the threats and become proactive when it comes to your own security. The new buzzword is anticipation, and the MITRE ATT&CK framework can help make this approach a reality.

The MITRE ATT&CK framework has now become an established tool for security teams to assess their organisation's security posture with respect to specific attackers and attack methods. With MITRE ATT&CK, teams can access threat intelligence from the constantly updated knowledge base to better assess their own situation and thus ensure that no critical elements of an attack are overlooked.

Implementation with the help of a Threat Intelligence Platform

One of the initial difficulties many IT teams face when implementing the MITRE ATT&CK framework is the sheer overwhelming number of different techniques and use cases that are made available to you. In order not to get bogged down in wracking one's brains over implementation given the multitude of options, one should first focus on a few use cases. In order to identify the relevant use cases, it is important to analyse one's own situation and to set priorities with regard to concrete data that is relevant for one's own company. What can be of enormous help here is a dedicated threat intelligence platform (TIP). Such a platform automatically aggregates threat intelligence and helps to identify and prioritise the data and information streams that are most important for the respective user.

In the following, we will present two use cases in which a TIP helps security teams get the most out of the MITRE ATT&CK framework. We are talking here about two pillars of modern IT security: the analysis of incidents and the hunting down and resolving of threats, so-called threat hunting.

When analysing incidents, it is critical to think outside the box in addition to examining the information gathered on the ground. In order to understand the bigger picture of an attack and assess how and why it occurred, the incident in question must be placed in relation to an organisation's individual risk profile as well as the global situation in the cybersphere.

This is where MITRE ATT&CK comes in: the data collected during internal analysis can be compared and connected to current attack campaigns and threat actors using the framework, giving context to the incident and thus helping to better understand why one's organisation in particular was attacked and whether further incidents might occur. Security analysts can use the framework's data as a detailed reference source to enrich their analysis of events and alerts, support their investigations, and determine the best actions to take based on relevance and incidents in their environment.

However, since manual data enrichment is error-prone, time-consuming, and tedious, a TIP can remedy this and free up the security team. By automating the collection and aggregation of data from the MITRE ATT&CK framework, security professionals save time, which is then freed up for higher-level tasks and analysis. In addition, such a solution ensures that no important information is overlooked when aggregating threat intelligence.

A relatively new, but extremely important approach in the fight against cyber threats is threat hunting. In this area, specialised security experts work with threat intelligence to proactively hunt for cyber threats. They hypothesise based on the information they gather, which they use to search for and resolve threats, contributing to the security of the organisation's IT and networks. Here, too, a TIP can do important work to speed up and simplify processes.

After the initial analysis of an incident, threat hunting teams can move from looking for so-called Indicators of Compromise (IoCs) to using the full range of ATT&CK data. Instead of focusing on individual suspicious data points, threat hunters can use the platform to work from a higher-level viewpoint with detailed information about potential and actual attackers and their methods. In this way, the security team can take a more proactive approach, first identifying the organisation's risk profile. The individual risks can then be mapped to specific attackers and their tactics, which then allows threat hunters to more closely examine whether appropriate data has been identified in the environment being investigated.

The usefulness of the MITRE ATT&CK framework depends not least on whether it is implemented effectively and whether security managers have the ability to aggregate and analyse the data in a simple way. Organisations can only make good use of the framework if they can properly assess and understand the relevant use cases and their organisation's individual security posture. To facilitate this, technologies such as threat intelligence platforms exist that are capable of supporting security operations teams at all levels of their work. These solutions enable deeper penetration into the MITRE ATT&CK framework, thereby optimising its effectiveness and deriving much greater benefit from the knowledge base.