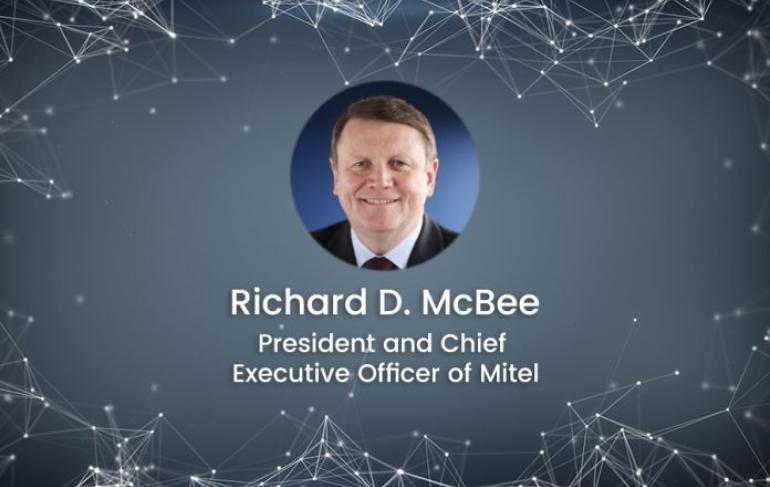 Richard D. McBee is the man leading Mitel to success. One of the most popular UC companies in the market, Mitel is a leader in cloud technology and state-of-the-art communication solutions. As CEO (Chief Executive Officer) and President of Mitel, Richard McBee guides the company's strategy, global execution, and business performance. McBee was appointed to the position of CEO for Mitel in 2011. He brought 25 years of experience in telecoms to the role, along with a passion for innovation and exceptional leadership.

Driving Growth and Profitability for Mitel

When Richard McBee joined Mitel in 2011, he was given the task of advancing the leadership that the business had already begun to gain in the communications market. Richard is responsible for finding new ways for Mitel to evolve and encouraging growth and profitability for the entire team. Under his impeccable leadership, the company has doubled its revenue to more than $1 billion. The brand has also achieved the number one position for market share in Europe. Before he did his part to help Mitel become the fastest-growing cloud communications company in the world, Richard served as the President of the Enterprise and Communications group for the Danaher Corporation. There, McBee was responsible for leading companies that supported the enterprise and communications markets, netting more than $700 million in revenue annually. Richard stayed with Danaher for three years, between 2007 and 2010. Before his position with Danaher, McBee also had a long-standing career with Tektronix Communications. Here, Richard held a variety of different roles, including Senior Vice President, Vice President of Worldwide Sales, and more. Over 15 years, McBee helped the business with its sales, services, and marketing initiatives.

A Commitment to Communications

McBee has a Business Administration Master's Degree, earned from the California Chapman School of Business and Economics. Additionally, Richard also graduated with a Bachelor of Science from the US Air Force Academy in 1986. For almost thirty years now, Richard McBee has led and inspired others from his numerous positions in the telecommunications landscape. Today, Richard serves as Chairman of the Board for one of the largest technology trade groups in Texas, the Tech Titans. When he's not helping Mitel to evolve, he's also acting as a member of the National Association of Corporate Directors.