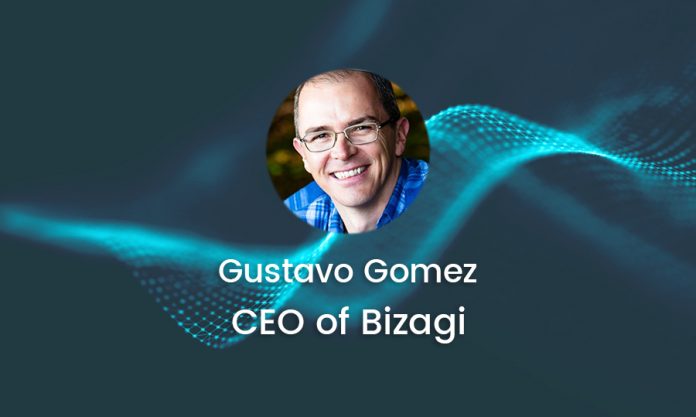 CxO of the Week: Gustavo Gomez, CEO of Bizagi

Gustavo Gomez is the CEO of Bizagi and an inspiring figure in the business agility world. With a degree in Computer Science, accreditations from business leadership programs and a commitment to all things business, Gustavo brings a unique style of leadership to Bizagi. Throughout both Columbia and Europe, Gomez has consistently pursued a career doing what he loves most - helping companies to evolve. In 1989, he founded Bizagi, choosing the name to represent both Business and Agility. For much of his time running the company, Gustavo was also working as CEO of Vision Software S.A.S too. According to Gomez, the world today is entering a period of Intelligent Automation. With Bizagi, he thus endeavours to create the process automation platform that all companies can use to remain competitive.

Following His Passion Over 3 Decades

Gustavo's entrepreneurial spirit means that he's committed to constantly finding new ways to solve problems. After 3 years working as a software developer in the banking sector of Germany, Gustavo became CEO of both Vision Software S.A.S and Bizagi. Gustavo ended his position at Vision Software in June 2017, 24 years and 6 months after it began. Gomez's position as CEO of Bizagi officially started in 1993, and he's still going strong today - more than 26 years later. Gustavo's passion and commitment to delighting both his peers and his customers motivate the people around him today. He believes in taking a hands-on approach to everything he does and infuses his work with strategic thinking and creativity. According to Bizagi, Gustavo Gomez is the perfect embodiment of the company's values of honesty, integrity, and commitment to amazing service.

Since it was originally founded in 1989, Bizagi has grown astronomically with Gustavo's help. Today, the business employs more than 400 people, with offices across the US, Europe, and Latin America. Bizagi's leading process automation software has more than 1 million dedicated users around the world, including some of the largest businesses in the market, like Adidas and Old Mutual. In 2016, The Columbian Association for Computer Scientists named Gustavo one of Columbia's top IT entrepreneurs. Gustavo accepted the award on behalf of both himself and the partners that helped him to build his thriving business.

Check out our previous CxO of the Week, Neha Narkhede, CTO and Co-Founder of Confluent