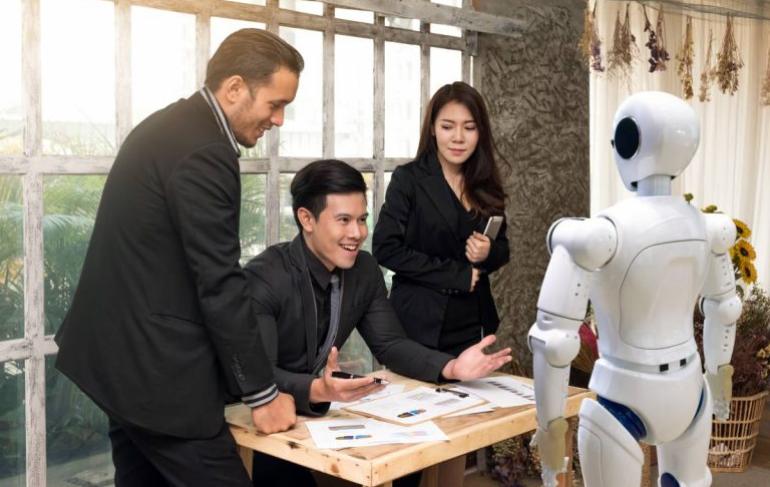 In 2008, people across the globe fell in love with the Disney Pixar hero, WALL·E, a little waste-collecting robot who ultimately reestablishes civilisation. WALL·E won the hearts of humans everywhere and has a very special place in many a household.

However, what if I told you that WALL·E also has a very special place in your business too?

"What place could that be?", you ask.

What is telepresence robotics?

Thus far, we've given robots a pretty bad reception when it comes to them replacing our jobs. However, if you can't beat them, join them, right? What better way to do so than to control your very own robot self. Besides, don't they teach you to keep your friends close and your enemies closer?

Telepresence robots are video conferencing screens (via smartphone, computer, or tablet) mounted on a moving base. Equipped with a video camera, speakers, and a microphone, these robots enable you to see and hear as the robot does when it moves around the room. The movements are controlled by you, giving you a human-like presence in a WALL·E-esque body. Thus, you can enjoy full immersion of the meeting experience while staying put wherever you are.

Why should we invest in a telepresence robot?

An enterprise tech adage is simply: don't invest in something for the sake of it. Just because it looks cool doesn't mean that you need it. However, with something as tech-y and futuristic as robotics, we tend to feel guilty about spending on them. In turn, we convince ourselves that they're of no real use to the business, particularly if office-based.

With telepresence robots, as long as you have people in the office, you have a use case. For example, say you or an employee were unable to get into work for an important meeting. Telepresence robots can grant you attendance in an instant, meaning you never have to miss out and can cater for the unexpected inconveniences life can throw at you. Similarly, these robots can be especially helpful for employees with chronic illnesses who may have difficultly coming in every day.

However, it's not just about sick days and train cancellations. Remote working is a sweeping trend, made possible by the ongoing digitalisation of companies. Not only that, but organisations are becoming increasingly aware of employee well-being, and remote working policies are just one initiative to give the workforce the flexibility they may need. Telepresence robots can help organisations cater for this style of working without any implications on workforce productivity.

What's more, it can save you time and money. Say that your London-based office also has a sister office in San Francisco. Rather than investing time and money into flights and accommodation (as well as your energy and sleeping pattern) to attend meetings across the pond, you can simply log in to the robot to move around and interact as you would have done in person. All it necessitates is good internet connection and you're good to go.

How is it any better than what we're doing already?

Telepresence robotics may not seem like a necessity, as we've all grown quite happily accustomed to surrounding a laptop on a table when someone video calls in. However, the setup is not convenient. In particular, the person conferencing in must rely on having someone move the laptop around to address different people. Otherwise, those present in the actual meeting room have to shuffle and move to get on the camera. Furthermore, if more than one person needs to be on camera in the actual meeting room, it might call for some huddling that's a little too close for comfort!

Given that there is a more convenient way to do it, why not jump at the chance? Telepresence robots ensure the professionalism of a meeting: everyone is seated, organised, has their own personal space and can hear and speak to each other.

Granted, these robots require a bit of a hefty investment. However, given the cost saving and accessibility perks they present, they can deliver return on your investment in more ways than just financially.