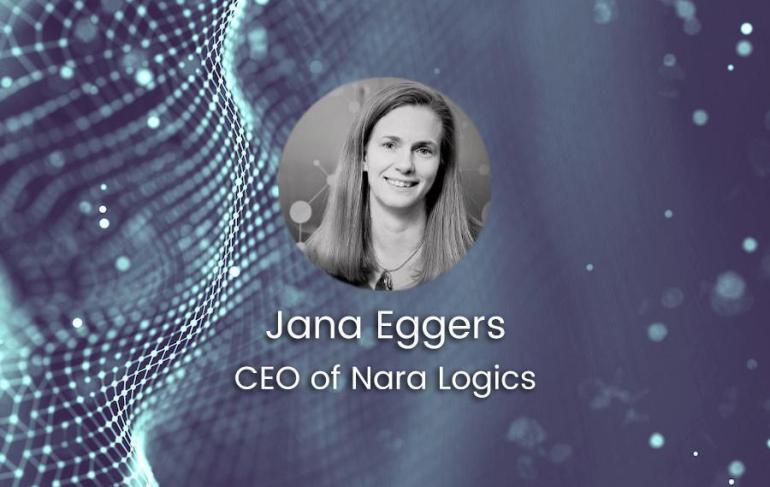 Self-confessed math and computer nerd, Jana Eggers is an inspirational entrepreneur with a mind for business. Currently, she's acting as CEO of Nara Logics - an AI brand with a passion for neuroscience. However, throughout the years, Jana's career has taken her through journeys with 3-person startups and 50,000-person corporations alike. Eggers opened the European logistics software offices for American Airlines and made the first strides into the digital world with Lycos in 1996. She's known for founding Intuit's corporate lab for Innovation and creating mass customization options at Spreadshirt. With a passion for innovation and teamwork, Jana continues to accomplish ever-more incredible things in the tech industry. She creates products that people love and delivers leadership that motivates entire communities.

An Inspiration to Countless Teams

Jana's career history features 25 years of technology and leadership experience. Today, she's the CEO of Nara Logistics, a company that turns big data into intelligent actions. She's been with the business for four years, guiding her team to use the latest in neuroscience tech to drive AI development. Before Nara Logistics, Jana was an SVP of products and marketing for Blackbaud for 3 years. There, she was responsible for a 700-person team, and 90 products across 20 digital platforms. Before that, Eggers acted as CEO for Spreadshirt - a company that helped to introduce mass customization to the world. Jana even did a stint in Intuit, assisting in the creation of the brand's innovation labs, as a General manager of the QuickBase software. A long and diverse career has led Eggers through multiple roles. She's been VP of marketing and business development for Basis Technology, and Apps.com. Eggers has also performed as the principal and analyst of the Sabre Corporation, as well as being a Business Development manager for Lycos. Between 1994 and 1996, she was an Analyst for PTCG, helping to deliver the next generation of transportation opportunities. Today, as well as running Nara Logics, Jana also acts on the Digital Advisory Board for the Fannie Mae mortgage financing company. She's also proud to be an ongoing mentor and consultant for startups and executives that need her guidance.

A Career Jumping from Strength to Strength

Eggers has an unwavering passion for development and technological opportunity. She's led small and large teams alike and helped entrepreneurs to find their feet in the startup landscape. In fact, Jana is even a guest lecturer at the IMD Business School. With a Computer Science education from the Rensselaer Polytechnic Institute and a BA in Math and Science from Hendrix college, Eggers has shown limitless potential over the years. She's always eager to contribute to the "bleeding edge" of technology, and Jana also added to SaaS businesses long before the term officially existed. Even in her spare time, Eggers is always looking for opportunities. Indeed, she owned and managed a company with her husband called SureCruise.com between 1999 and 2018. This is a woman who is continuously accomplishing incredible things. It doesn't seem as though she'll ever slow down.

Enjoyed this post? Check out our previous CxO of the week.