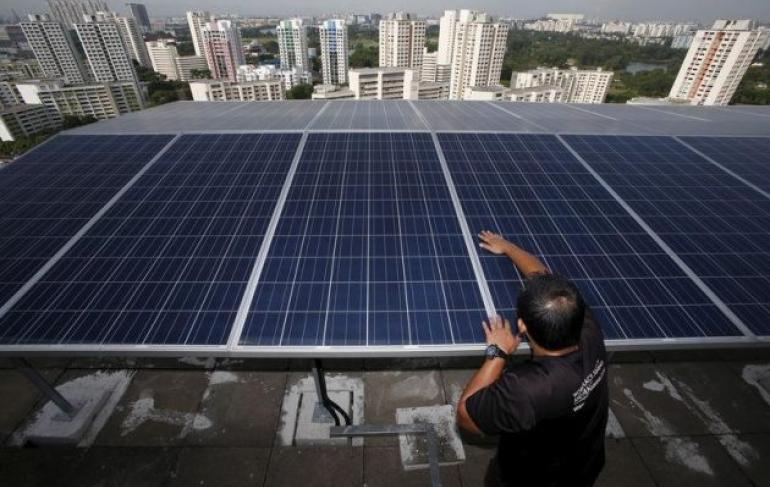 Microsoft is the latest tech company to choose renewable energy sources to power its data centres.

One of its newest facilities, this one located in Singapore, will be powered by rooftop solar panels.

Not all of the panels will actually be on the roof of the data centre – Microsoft will buy the energy from a local provider called Sunseap within a 20-year deal.

The two companies claim their partnership will “create the single-largest solar energy portfolio in Singapore to date”.

Singapore is a tiny city-state, so all the rooftops in the entire country could be used to provide the 60 megawatt-peak Microsoft and Sunseap say they are looking to generate.

But despite the possibility of looking like one giant solar dish when viewed from space by passing aliens, the Singapore authorities are supportive of the initiative.

“We are seeing a distinctive trend of local and foreign companies using up to 100 percent renewable energy to power their business operations, and Singapore is positioning itself to serve that need.

“EDB welcomes this latest agreement between Microsoft and Sunseap, which will help proliferate adoption of clean energy, and spur further innovation in new business models and technologies.”

Kevin Wo, managing director, Microsoft Singapore, said: “Our cloud services are helping to power Singapore's digital transformation, and today's agreement will ensure that transformation is increasingly powered by clean energy.

“We're proud to work with Sunseap, the leading solar provider in Singapore, to support the growth of the local clean energy economy. With the agreement, Microsoft will improve the sustainability of our local operations and make important progress toward our corporate sustainability goals for data centers.”

Lawrence Wu, co-founder and director of Sunseap, said: “Sunseap is pleased to work with Microsoft on this landmark solar project.

“We see exciting potential in our partnership with Microsoft to raise awareness within the tech industry of the importance of adopting renewable energy solutions.

“Their investment in Singapore solar indicates a growing momentum for clean energy in the country and will further the positive ripple effect for organizations in Singapore to incorporate sustainability practices in their businesses.”

“We're on track to exceed our goal of powering 50 per cent of our global datacenter load with renewable energy this year. Once operational, the new solar project will bring Microsoft's total global direct procurement in renewable energy projects to 860 megawatts.”

Although this solar project is a step in the direction of making Singapore a clean-energy city, Singapore is still not one of the 100 or so cities in the world which are powered predominantly by renewables.

According to an environmental research company called CDP, 101 out of 570 cities it monitors now meet 70 per cent of their energy needs using sources such as solar, wind, and hydro.

As quoted on The Guardian website, Kyra Appleby, CDP's director of cities, said: “Reassuringly, our data shows much commitment and ambition. Cities not only want to shift to renewably energy, but, most importantly – they can.”

The data centres built by tech giants such as Microsoft, Google, and Apple are generally powered using renewable sources.

Apple claims to use 100 per cent renewable sources for all its data centres. And Google states that it's got enough money to buy more renewable energy than any other company or organisation in the world – and claims to do so. Actually, it claims to be the single-largest buyer of clean energy in the world.

As reported on EM360º, Google's SVP of technical infrastructure, Urs Hölzle, boasted: “Today, we are the world's largest corporate buyer of renewable power, with commitments reaching 2.6 gigawatts (2,600 megawatts) of wind and solar energy.

“That's bigger than many large utilities and more than twice as much as the 1.21 gigawatts it took to send Marty McFly back to the future.”