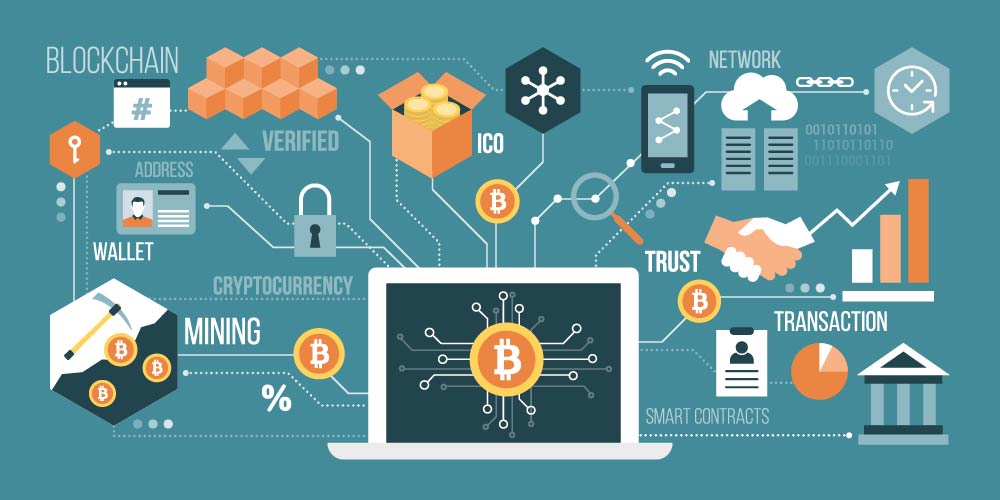 10 cryptocurrencies you need to know about

Cryptocurrencies: Bitcoin and beyond

It's an everyday topic of conversation these days "what cryptocurrency have you invested in?" "is it too late to buy bitcoins?" and the annoying friend of yours who goes on and on about how much his bitcoin would be worth today had he sold them years back. But the main question here is is cryptocurrency just bitcoin alone? or is cryptocurrency more than just bitcoin? Here is a list of crypto currencies which we don't necessarily suggest you invest in, rather its more of you "knew about it before it became popular".

Cryptocurrency seems like the future of digital currency as the whole world moves towards a cashless economy. It seems as if we are living in a world of a futuristic video game as we drive our keyless cars and pay for a cup of coffee using just our mobile phones. It's surreal to think that digital currency was exposed to us at an early age of online gaming as we casually spent “Linden dollars” in Second Life or the “Simolean” currency in SimCity.

Cryptocurrency is giving us a different reality of digital currency. Something that has literally blown out of proportion in terms of reality and science fiction.

Linden dollars – which are generally bought for real dollars – can only be used in the Second Life game, and Simoleans can only be used in SimCity, whereas cryptocurrency is accepted by millions of people around the world outside of any computer games. It's strengths are far more ambitious than your simple Apple Pay or Android Pay. Cryptocurrencies' strengths are the speed at which cross-border or any transactions can be made and that it cuts out all the middlemen, including governments and central banks, and the apparent anonymity of the parties involved.

While you might be curious to know what the hype is all about here are the top 10 cryptocurrencies, listed according to a number of factors, including their current trading prices and potential increase or decrease, as well as how widely known and adopted they have or will become, and whether they're any good for drug-dealing.

You don’t need us to do the maths for you, but we will anyway. If you’d have invested just $1,000 in bitcoin at the beginning of this decade, the value of your investment would now be $8,500,000 – that’s eight point five million dollars.

The only thing deflating about the bitcoin market is our will to finish writing this article.

Ethereum has gained some additional credibility through its application by Microsoft as part of the tech giant’s “blockchain as a service” offering.

Global investment banking giant JPMorgan is also part of the project, which is also connected to something called the Enterprise Ethereum Alliance, with at least 35 very big banks and other institutions in it.

Ethereum seems to be pushing its technology as a gateway to the understanding and application of blockchain, rather than as a currency or product as such – it apparently wants to be at the centre of an open-source standards development movement around blockchain.

That’s not to say it has negligible monetary value – far from it. The market capitalisation of ethereum cryptocurrency is more than $85 billion, which makes it bitcoin’s closest competitor, although it’s difficult to see how it can get close enough to be called a rival.

There’s also ethereum classic, which has a market capitalisation of more than $2 billion.

This one hasn’t even been launched yet, but we thought we’d include it now because we just mentioned about banks being part of the Enterprise Ethereum Alliance.

The financial institutions in that alliance include UBS, BNY Mellon, Credit Suisse, ING, Santander, and of JPMorgan.

But Goldman Sachs is often thought to be bigger – or at least more influential – than all of them put together. And it’s Goldman Sachs which is behind setlcoin, having applied for a patent regarding it. (See EM360º story about setlcoin.)

These days, alliances and partnerships between companies are not always exclusive, which means that there’s little or nothing to stop banks from being part of alliances to support both ethereum and setlcoin, or many more cryptocurrencies.

But there are many serious issues the banks have to consider. Most importantly, whether the central banks and the governments of the countries in which they operate will approve of their activities in the cryptocurrency market – basically because cryptocurrencies have the potential to undermine recognised and accepted national currencies.

For the time being, what happens is that banks convert cryptocurrencies into those recognised and accepted currencies before passing them into the government-regulated open economy.

Litecoin was launched in 2011 and was at one time the second-most valuable cryptocurrency.

It’s been overtaken by some of the newer cryptocurrencies, but it’s still in the top 10, with a market value of $10 billion.

Litecoin may be on the way to regaining more of its relative value as it is launching a payment service called LitePay, which will enable transactions without fees, according to a report on the Sunday Express.

The strategy seems to be to try and get more people using it rather than be too concerned with making money right now, which is probably the same strategy for a lot of the other cryptocurrencies.

Litecoin is thought to have some technical advantages over bitcoin because its proponents say it is a faster and more convenient system.

Ripple is one of the new cryptocurrencies which has overtaken litecoin – and even overtook ethereum at one stage – to become the second-most valuable at some point last year.

It’s been on a slight downward trend since the beginning of the year and – as might be expected with such a dynamic and fast-moving cryptocurrency and market – Ripple has had its fair share of ups and downs.

At the moment, Ripple’s market value is almost $33 billion, but that could change either way by a billion or two by the time this article is published.

However, the financial newspaper City AM says Ripple is the cryptocurrency to watch because of its “transformative offering to financial service institutions”.

We chose to include monero because of the name. It’s a bit like “money”, except without the “y” and with an extra couple of letters – “ro” – at the end.

Sort of encapsulates what the whole cryptocurrency market is all about – it’s about money, but not as we know it.

Some people – including JPMorgan boss Jamie Dimon – have argued that the entire cryptocurrency market is a sham, or maybe he said “scam”. Either way, he and a lot of others remain highly sceptical.

They may have changed their minds since then because the cryptocurrency market has not only grown in value dramatically in the past year, but also because – as noted earlier – more institutions are beginning to accept them, or bitcoin at least.

Monero may not move in the same circles as bitcoin, but it has a healthy market capitalisation of more than $3.5 billion.

And, in cryptocurrency terms, it’s been around a long while.

It’s interesting how a cryptocurrency that relatively few people even know about can be worth billions.

Nano, for example, has a market capitalisation of more than $1.7 billion – and that’s after a 20 per cent drop in the past 24 hours.

It will probably be back up again in another 24 hours, but not even the specialist cryptocurrency news websites know much about this one.

This is not to criticise nano, it’s just an illustration of how many cryptocurrencies have been launched in the past year or two – with many more on the way.

Other relatively obscure yet valuable cryptocurrencies which have seen big drops in market cap in the past 24 hours include: PACoin – down 36 per cent; Spectrecoin – down 23 per cent; and I/O Coin – down 20 per cent.

In the past 24 hours, almost all of the 100 cryptocurrencies listed by Coin Market Cap have lost some of their value. The losses range from 0.2 per cent for litecoin to 36.02 per cent for PACoin.

Only two companies of the hundred have gained value: Bitcore, up 0.64, and Shield, which has gained 3.69 per cent.

This is probably not a typical day for cryptocurrencies, as evidenced by media reports saying there is some sort of crash happening.

But such reports come and go, and over the longer term, the cryptocurrency market keeps on growing.

Shield has a market value of $34 million, which is number 97 of the 100 cryptocurrencies that Coin Market Cap lists.

That’s what I’m talking about, as some might say. A cryptocurrency specifically for the cannabis industry.

The attraction of cryptocurrencies is their ability to bypass national and international governments and other authorities whose job it is to stop drug-dealers from laundering ill-gotten gains and passing the money into the open, lawfully regulated economy.

But with cannabis being legalised in large parts of the US and in many other countries worldwide, drug-dealing ain’t what it used to be.

We’ll leave aside trickier questions about illegal arms dealing and other illicit activities because we’ve already gone beyond the scope of this article.

Potcoin’s market value is almost $34 million, which probably means there’s a lot of stoned people out there.

Like litecoin and many other challengers to bitcoin, EOS is one of the new cryptocurrencies which are trying to differentiate themselves using speed of transactions as a factor.

The company claims its system is capable of scaling to millions of transactions per second and eliminates user fees.

EOS has a market capitalisation of $5.6 billion.

Another one worth mentioning is Playkey token, the cryptocurrency behind Playkey, the cloud-based gaming platform set to decentrilise later this year.

What makes it “unique and potentially game-changing”, according to the company, is the means by which gaming enthusiasts are able to earn the token.

By renting out high-end gaming devices to other, less equipped gamers – Playkey users are able to earn PKTs, which can then become a genuine source of income.