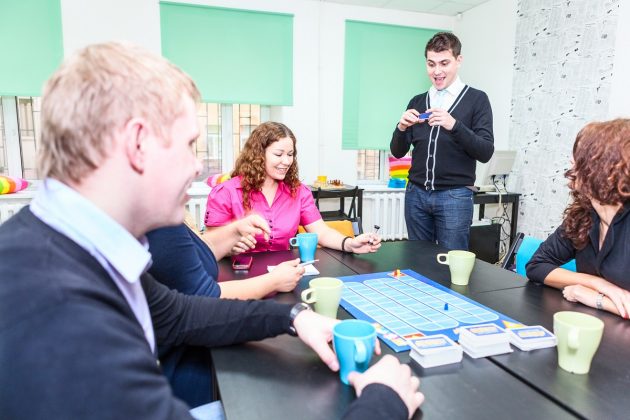 Should you use game tactics to achieve your learning objectives at work?

Achieving learning objectives is part of the remit of most senior managers. Typically, this has been achieved through providing a blend of classroom and online learning and potentially grouped together in a learning management system (LMS). But the mere provision of these services, does not automatically encourage the uptake by employees.

In fact, the obvious is often overlooked, namely that for the employee, with the exception of new employees and those working in the learning team, learning is not their first priority. For most employees, doing a good job in their role is their top priority. Equally there is an ever-increasing need for relevant training, available at the speed of a Google search. The biggest criticism training receives is that it is boring or not quite relevant to the role of the individual. Especially compliance related subjects tend to have a bad reputation on the boring scale.

To combat this, the world of learning has been looking at games to provide some solutions to increase the uptake of learning and the hitting of learning of objectives. With it entered the term ‘gamification', which is explained as the application of game psychology, game mechanics and game dynamics to business processes such as learning, productivity and HR. It doesn't mean that work all of a sudden becomes frivolous and one big game, but rather that in meaningful and impactful places of the process, you find nudges in the shape of game mechanics (albeit with a lot of game psychology behind it) to help you forward.

Recent research by Nesta has shown that the average gamer in the UK is likely to be a 43-year old female. The old stereotype of a teenager locked away in a dark room with a computer playing a multi-player online game is no longer the norm. Instead on your daily commute into work on public transport, you will find people of all ages playing games on their smartphones. There are even claims that some younger generations will have spent more hours gaming than they have done studying for a degree or diploma. This trend put together with the mass uptake of social media, has created a market for gamification.

Imagine your learning management system behaving similar to social media, which are in my view the most gamified messaging systems around. It will be asking all employees including senior managers what they have learned today or what they are learning and allowing your colleagues to like and share what you posted.

I hazard a guess that this kind of information stream would become a popular talking point. The prompting of what we want to encourage more of, is what is used in games as the starting tutorial to learn a game. Behaviour is reinforced thanks to both positive feedback through the means of sounds, visuals, stars, points, etc. and negative feedback in the shape of losing points, losing a live, having to start over, etc. These kinds of mechanics added to learning are proving to bring increased completion, better retention of information, proof of skill and more engaged learners.

In games, we learn nearly without noticing it, effectively we are fighting our way through different levels by overcoming challenges. On a day-to-day basis in work we probably do the same, with varied learning curves depending on your experience and job path. The best combination of blending these two worlds is to make learning very similar to real life situations with consequences that are life-like only in a virtual setting.

For example, what would happen if you let an employee work through various every day compliance issues where they have to choose an approach based on real life variables?

Depending on the choices they make they receive instant feedback like you would in a game. The learning setting makes it safe to allow for mistakes. Allow for failure in a given choice, but provide feedback with it and a chance to make a new choice. By keeping examples real and close to what could be presented in reality, you create the potential for intrinsic motivation to kick in and let the learner explore their options out of curiosity. Invite them to check out if they are skirting on the edge of the law, when they use company tools on their travels for example. Let them in the learning setting explore overstepping the legal lines and end up with a fine or in jail for serious breaches. It is more life-like to learn from your mistakes. Rather than to be told how to do something, especially when the information is not new or simply based on common sense decision making.

What about a bit of competition?

Competition is useful if the best or those up for a challenge, can voluntarily opt in to a short-term knowledge tournament or quest of some kind. If a company culture is completely set up by ranks and levels, an element of competition may come natural to the recruited staff. But when company culture is not that competitive, then team challenges where people have to collaborate to achieve and win, are more valuable than individual competition. Benchmark indicators however of how I do in comparison to the body of peers at my level and seniority on the other hand are useful and will drive improvements.

Imagine an average learner who is a slower learner in some subjects in school, faced with a learning competition around retention of information in one of the subjects they struggle with. The mere introduction of competition enhances their levels of anxiety of being seen to be stupid on a league table. It also reduces their learning effectiveness. An open relaxed mind can take on more information than a stressed anxious one, which is already trying to defend itself.

Now consider the same dynamic in the workplace, an otherwise smart individual who is well respected by peers, at the bottom of a leader board on the learning platform for all to see. Think of the impact for that individual on their own self-esteem and secondly the added perception this now creates with their peers and colleagues. Competition against colleagues by default encourages holding on to information in order to beat the next person, winners or league leaders gaining and lower ranked individuals often taking a personal self-esteem drop and facing a potential negative perception by colleagues.

My health warning is to be careful with game mechanics that introduce competition by default, the side effects may be less favourable than the temporary gains from it. If you are holding a competition though, set it around things such as finding bugs in tools people are using, or like our teams do on occasion, we slay monsters together by completing tasks.

What does the future hold?

In my view the concept of the flipped classroom, where the learner drives what they want to do will continue to be a source of change, combined with the future of work being more gig-driven.

Workplace tools will need to adapt and follow regular apps, games and devices their people use all of the time to function outside work. Our tools will become smarter and more personalised and I expect the same to happen with gamification.

Early day gamification saw a lot of points, badges and leader-boards, thankfully we see more considered design entering platforms appealing more to what truly is important to a learner or employee. The superficial game mechanics will be lost in favour of more personalised and stylised messaging based on preferences, choices and consequences.

The power of gamification will be in the feedback loops and paths to mastery reinforcement.

I also see interesting improvements coming from artificial intelligence, not only to empower search and recommendation capability, but also to create adaptive algorithms providing us with the next levels of learning based on how well or how poor we answered specific knowledge tests.

Another technology that I am excited about and hope will impact gamification in a positive sense is blockchain for the recognition of skills. Imagine a badge system of skills, which you as the individual can set up at the end of any project or earn through a course and then send to the blockchain for skills recognition. The requirement of approval would be that the person has indeed seen you in action and can validate the skills level based on their own experience of you in this field. Each approval containing a time stamp and immediately giving a snapshot on how good and fresh your skills are. It would allow us to travel with our competencies around the world and across organisations.

For organisations, it would have the added benefit that you can see a quick snapshot of skills from employees within the company, which could in turn then be deployed to different projects. This also would highlight gaps and recruitment needs.

In conclusion, I expect gamification to follow a similar track to social media, where over time it will be part of our work systems as a standard feature and no longer an additional “nice to have”. In the short term, gamification platforms will provide the functionality through integration with existing systems and they will potentially always provide the most flexibility for company-wide deployments.

Over time some of these will be absorbed by ERP or productivity focused systems or simply included in the standard required features of workplace tools. Artificial intelligence and blockchain will create new enhancements, but gamification as a way to nudge behaviour in my opinion will be here to stay.