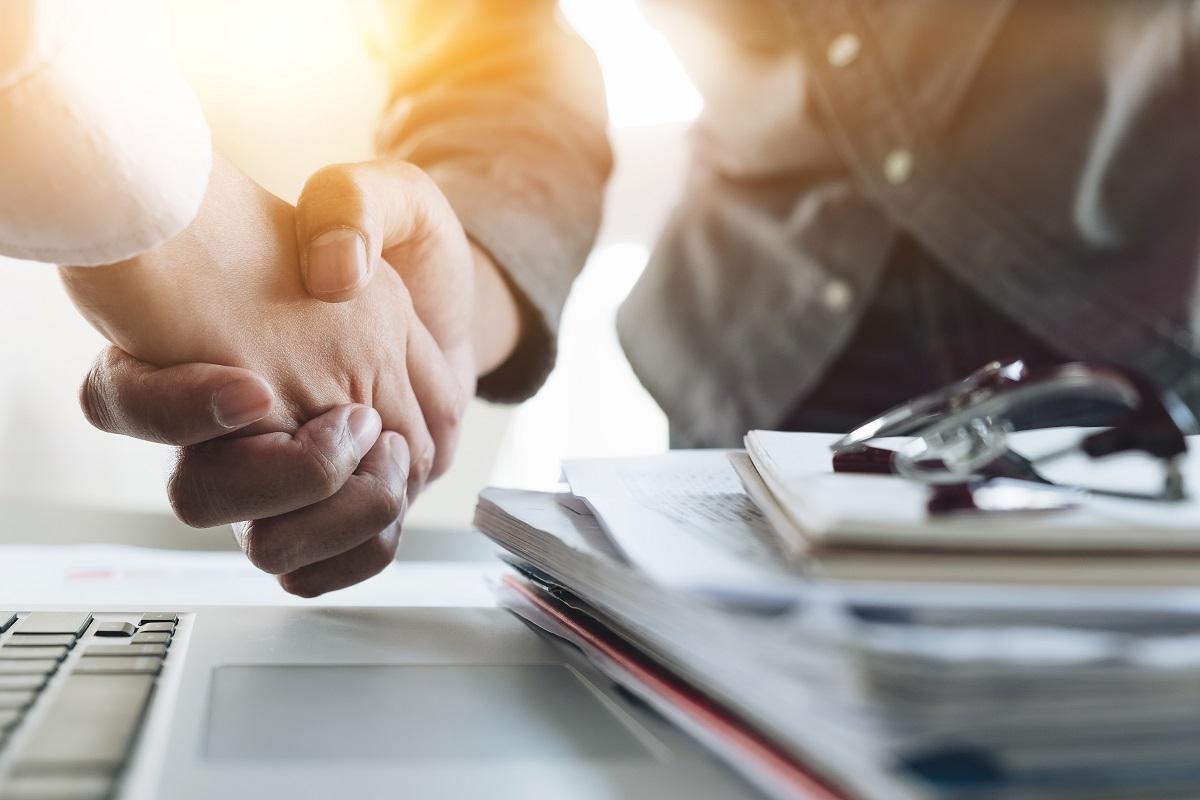 Mergers and acquisitions have been occurring with frightening regularity in recent times, and have involved terrifying sums of money.

The big tech companies such as Google, Apple and many others have been spending like there is no tomorrow, partly because everyone is scared of what artificial intelligence will do to them in the future.

But that's not the only reason for M&As – sometimes it's a simple case of finding economies of scale through merging certain parts of two companies operations.

Whatever the reason for the merger or acquisition, and whatever AI does to us tomorrow, let's live in the moment and speculate on which recent M&As have the most significance for our collective future as nothing more than data sources feeding the software running on the gigantic AI Matrix-type platform of next year or some year after that.

For your Weekly roundup of the top M&A's check out our weekly updates.

Apple is famous for having more money than exists in the universe, so, theoretically, it could actually buy the entirety of space and everything in it.

However, given those sorts of funds, the company is somewhat modest in its acquisitions, carefully selecting each company and paying what might be considered a reasonable price each time, although that’s really a matter of opinion.

The latest acquisition Apple has made is Shazam, an app development company, for $400 million. That’s not much money compared with the $3 billion the tech giant paid for Beats Electronics in 2014, but it’s the biggest acquisition of the year.

Another deal Apple made was with Lattice Data, which is believed to possess machine learning expertise, something of increasing interest for Apple, which bought the company for $200 million earlier this year.

Interestingly, although some might think Siri – the voice AI integrated into its devices – was developed in-house at Apple, the company actually bought Siri for $250 million back in 2010, and Turi – another AI company – for $200 million last year.

Another cash-rich colossus, Google’s biggest acquisition of the year was its purchase of HTC’s Pixel smartphone manufacturing division.

Google has made several acquisitions of more than a billion dollars in the past 10 years, as CB Insights notes in one of its typically informative infographics: Nest Labs, the smart home tech company, for $3.2 billion; DoubleClick, the ad network, for $3.1 billion; and – famously – YouTube, for $1.7 billion.

But the search giant’s biggest acquisition to date was Motorola, another mobile phone company, which it bought for $12.5 billion in 2012.

Google seems intent on challenging Apple’s dominance in the smartphone market, which should make for an interesting year or two ahead.

While a lot of people rightly think of Amazon as a cloud services provider – it’s the biggest after all, Amazon itself doesn’t forget that its main business is retail.

So, not only did it pay an astonishing $13.7 billion to buy Whole Foods Market, Amazon also bought Middle Eastern e-commerce company Souq.com for another $580 million.

Among tech companies Amazon has bought in the past few years is one that has, arguably, proved to be one of the key reasons for its success in retail – Kiva Systems, maker of warehouse robots, which Amazon bought in 2012 for $775 billion.

Other tech acquisitions include Annapurna Labs, a microelectronics company, for $370 million, AWS Elemental, a video app development platform, for $296 million, and Twitch Interactive, a live streaming video platform, for $970 million.

Daimler invests in Via

Although it’s not a “tech” company in the way most people understand tech these days – in that it’s not mainly a computer technology company – Daimler, parent company of Mercedes, has been making some interesting investments.

Earlier this year, the oldest car company in the world led a $250 million funding round to invest in Via, a car-pooling app company, an investment which clearly signals Daimler-Mercedes’ acknowledgement that new-tech players like Uber could forever transform the automotive market in the near future.

The general feeling is that people of the future will be less inclined to buy cars, and hire them instead – much like they hire bikes in urban areas. And Daimler, like most other carmakers, wants to play in this new game.

Nvidia’s Drive platform seems pre-eminent in this new market, but Intel and others are looking to get in. Intel paid $15.3 billion to buy a company called Mobileye, a provider of computer vision technology, and together they are planning to launch an autonomous car soon.

This is a sector well worth watching if you’re interested in technology as it will probably see dramatic changes going forward, with – at the very least, even before driverless cars arrive – all those fiddly buttons and levers disappearing to give way to completely computerised touchscreen or virtual dashboards.

With the disastrous acquisition of Autonomy – which it bought for $11 billion in 2011 – well behind it, Hewlett-Packard has made a number of strategic investments this year to strengthen its cloud computing offering.

Cloud Cruiser had raised around $20 million investment before the acquisition, which may indicate the price. HP has also bought a cybersecurity company called Niara, also for an undisclosed sum, but that company had also raised just over $20 million in funding before its sale.

In the past five years, HP has acquired a number of cloud services companies – specialising in security and computing – so the company is probably looking to continue its progress in the cloud market.

HP is currently the largest supplier of servers to data centres, but this is a market which may erode with the emergence of cheaper, so-called “white box” manufacturers, and software-defined networking.

HP’s new emphasis on “firmware-level security” may, however, help the company maintain its market share.

The networking giant has been very busy on the mergers and acquisitions scene. Cisco has acquired – or is in the process of acquiring – no fewer than nine different companies in 2017 at last count – and there’s still almost a month to go of this year.

Like HP, Cisco is another big provider of hardware to data centres, and, being a brand name, faces the same pressures from the white-box providers and software-defined networking.

The most notable acquisitions – because they’re the largest – have been that of networking company Viptela, for which Cisco paid $610 million, and IT operations analytics company AppDynamics, for which it paid a colossal $3.7 billion.

Cisco also bought artificial intelligence startup MindMeld for what might be considered the bargain-basement price of $125 million. It also paid $1.7 billion to buy Broadsoft, a cloud-based telephony company.

Computer tech trade journal CRN says Cisco has “made it clear that it is serious about the software-defined wide-area network market” though its acquisitions.

Staying with CRN, which lists the largest – in monetary terms – tech M&As of 2017, the biggest deal of the year was done by Apollo Global when they aquired West Corp.

Apollo, a private equity fund, is said to be paying more than $5 billion for West Corp, a telecommunications services provider.

West was said to be doing well in unified communications but the company wasn’t growing.

According to CRN, Apollo’s $5 billion takeover of West is the biggest tech M&A of the year – in monetary terms.

It probably doesn’t have the media cache of other companies on this list, but Wipro is said to be the third-largest global IT services company with a very large share of what’s called the business process services sector.

Wipro’s been on the acquisitions trail in recent years, and in its latest deal the company paid $9 million to buy InfoServer, which provides IT services to the financial sector.

Crunchbase notes that Wipro spent almost a billion dollars last year on two acquisitions – it paid $480 million for HealthPlan Services, and another $500 million for IT services company Appirio, claimed to be the third largest global consulting partner in the Salesforce ecosystem.

Although this is another one which doesn’t quite fit the computer tech category, it’s such a huge deal that it’s difficult to ignore.

Disney has agreed to pay a gigantic $66 billion for Sky and the potential of all the movies both companies own being online in one single package is surely an enticing one from the consumer point of view.

It’s certainly a deal which would have been noted by the likes of Amazon, because of its interest in providing online video entertainment, and of course Netflix.

It’s not a done deal yet, and governmental authorities may still reject it.

Not very long ago, Qualcomm was seen as the potential usurper of Intel as the world’s largest chipmaker, but the departure of Apple from its client list has left Qualcomm in a quandary.

Should it expand through acquisitions or through allowing a takeover? Apparently, it would prefer to go it alone and acquire another chipmaker, NXP, which has a strong presence in the growing automotive market.

Qualcomm offered $47 billion for NXP earlier this year, but not much else has happened since then.

However, Broadcom has offered way over $100 billion to buy Qualcomm and it may be a sum that the latter’s board find difficult to reject, although they haven’t said much about it.

To sweeten the deal, Broadcom has offered to go through with Qualcomm’s NXP purchase as well.

According to CB Insights, if the deal were to happen, it could end up being the largest tech takeover in history, with a transaction value of $130 billion.

Whatever happens, it should be an interesting year ahead for the tech sector.