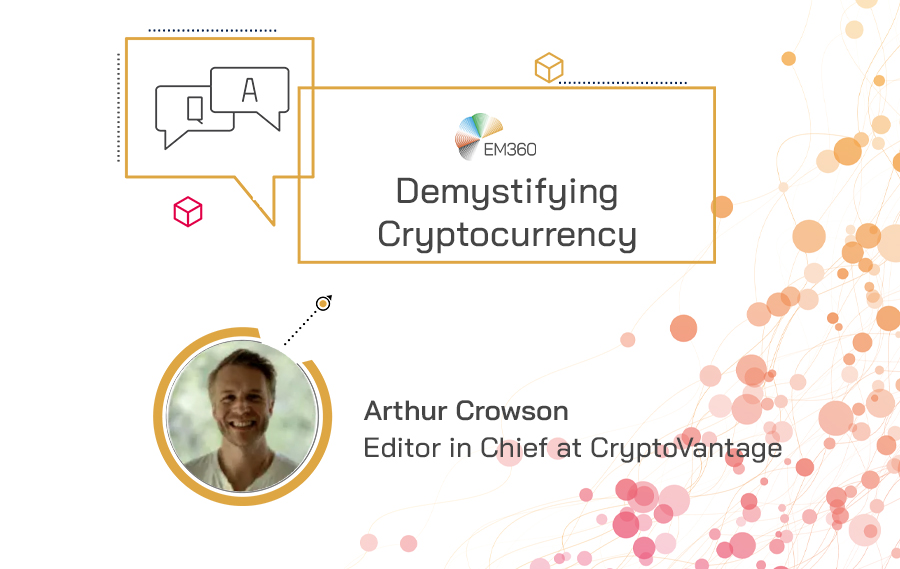 Digital money; cryptocurrency rate; bitcoin. If you're not familiar with these fintech buzzwords, then you've probably been living under a rock. With the pandemic causing hundreds of thousands of job cuts and redundancies, many of us have been finding other ways to generate income, expand our financial portfolios, or simply put more money into our pockets, and investing in digital assets has proven to be the most popular method. The industry is booming. However, it isn't the easiest hustle. Eager beavers need to be clued up on the process before they dive in and spend their hard-earned cash with the hope of making a larger profit.

To get the lowdown on the digital currency boom and find out how to break into the sector, we spoke to Arthur Crowson, Editor in Chief at CryptoVantage. CryptoVantage is a one-stop shop for curious individuals who wish to engage in digital currency, but are unsure where to start. From qualified reviews and how-to guides to answering frequently asked questions about the often-mystified space, beginners are sure to find everything they need to start their crypto journey on the right foot. Arthur is one of the company's lead writers. He has documented the rise of cryptocurrency since the mid-2000s.

Thanks for joining us Arthur! To begin, can you tell us how and why you got into cryptocurrency journalism?

I worked in the online poker industry for over a decade and encountered Bitcoin pretty early on (I think it was around 2011) when I profiled an up-and-coming Bitcoin-based poker site. One of the key personalities behind the site took the time to explain the technology to me in detail and I thought it was really interesting.

Moving massive sums of cash across the globe has always been a major issue for the poker industry so cryptocurrency was a potential solution.

Crypto is a bit of a rabbit hole because the more you learn about it the more you tend to see the various applications for it.

I'm particularly interested in cryptocurrency as a savings technology for regular people. There is a real void in the market currently as the combination of inflation and low-interest rates have made savings accounts effectively useless. Not everyone has access to securities or real estate either.

My main goal at CryptoVantage is to make crypto more accessible to everyone.

What's the current landscape of digital currency and in what ways has the industry evolved since you first entered the scene?

I would say that perhaps the biggest shift I've noticed over the last five years is the way that Bitcoin is viewed primarily as a store of value rather than a currency.

That might change in the future but right now no one really wants to spend their Bitcoin. Initially, everyone thought we'd be buying coffee or Teslas with Bitcoin but it hasn't really played out that way.

It can be difficult for people to acquire Bitcoin so to immediately spend it doesn't really make sense.

More widespread adoption is likely coming (which will help smooth out the crypto ecosystem) but right now Bitcoin (and many other cryptocurrencies) are primarily investment vehicles.

I definitely got that one wrong in my initial assessment of Bitcoin.

Cryptocurrency, bitcoin, and altcoin are the most frequently discussed, and often interchangeably used, terms in the virtual money space. What do they mean and are they comparable?

Bitcoin is really in a league of its own. It's the default cryptocurrency with - by far - the most mainstream recognition. One underrated aspect of Bitcoin in terms of mainstream attention is the name. It's great. People get it. Projects like Ethereum and Cardano sound much more abstract.

Despite the fact that Bitcoin's technology is arguably behind some of the other cryptocurrency projects, I think it will always have a special place, regardless of whether you think it will ultimately be the dominant coin.

Meanwhile, there's incredibly exciting work happening in the rest of the crypto industry. Projects like Ethereum, Polkadot, Cardano have the potential to replace entire banking systems. I would say Bitcoin is more singular, like digital gold.

I've always hated the term altcoins. It's like calling every car that's not a Ford, alt-cars. I think it's confusing to new users. Cryptocurrency is far better.

What does the rise of e-money mean for the future of traditional banking?

It's insane to me that it's still so difficult to cheaply transmit value around the globe. The banks are holding on to their legacy networks like ACH, SWIFT, and SEPA when the ground has shifted.

It reminds me of how VOIP disrupted the telecommunications industry. The institutions (AT&T, Verizon, etc) still have value but the underlying service (making phone calls) is free if you have a device connected to the Internet.

There will still be a need for banks but their role as the sole custodians of our money is coming to an end.

You've written extensively about Elon Musk's investment in bitcoin. Are there any other business magnates that are passionate about digital currency and how are they impacting the sector?

I would say most people in cryptocurrency are actually a little lukewarm about Elon Musk's involvement with crypto. The mainstream attention is nice but he's a little too unpredictable for the likes of most crypto enthusiasts.

I think MicroStrategy CEO Michael Saylor is probably the most highly-regarded business figure in the crypto space. Saylor is extremely passionate about Bitcoin and has committed over a billion dollars of his company's balance sheet to BTC. To say Saylor is bullish on Bitcoin would be an understatement.

What advice would you give to someone who is looking to get into cryptocurrency and succeed in curating a robust financial portfolio?

Start small! Cryptocurrency remains an extremely volatile asset and it's likely to go through some massive growing pains over the next five to 10 years. It's still very early and this is a completely new type of asset.

I'll follow that up by saying that it's becoming much riskier to NOT have any crypto exposure. For most people, I think starting with 1% of your portfolio is fine. Anywhere from 1-10% seems reasonable depending on how comfortable you are with risk. Unless you want to dedicate your life to trading

crypto, I would also recommend taking a long-term view of cryptocurrency. In other words: plan on holding 1-5 years.

I've found dollar-cost averaging to be an extremely effective and hands-off way of investing in crypto. Simply buy $100 of Bitcoin every month and you should be able to ride out the inherent volatility.

Previous article
The Governance of AI: the ‘Brussels Effect’ of a Pan-European Framework
Next article
Overcoming Digital Transformation Barriers